I spent over 7 hours in the car yesterday trying to get home to watch the PGA Championship (long story--4 different accidents on the freeway made what should be a 4 hour drive almost 8 hours) because Tiger Woods was in the lead, and he has never lost a major championship match when he was in the lead on a Sunday. 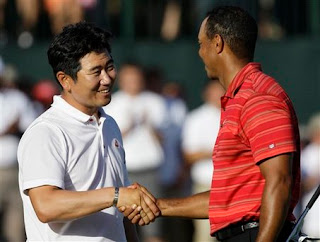 It has been interesting watching golf coverage and reading about this win. Because most golf journalists and commenters have been pretty careful with saying that Yang is the first male Asian-born golfer to win a tournament. A distinction worth noting because there have been several Asian female LPGA tour winners (many from South Korea like Se Ri Pak and Birdie Kim) and because Vijay Singh, who is of Asian descent but born in Fiji has also won major championships. Of course, it's also an important distinction because Tiger Woods is a mixed-race golfer of Asian-African American descent: his mother, Tida, was born in Thailand which makes Tiger half-Thai by ethnicity and half Asian American by racial categorization. 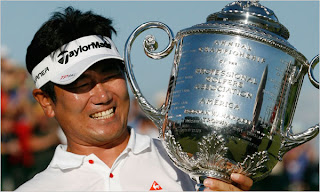 I mention all of the above because Yang is being heralded in South Korea as the first Asian golfer to win a major PGA championship, but in saying so, it does ignore both Vijay Singh and, most importantly, Tiger Woods' ethnic background. As if somehow Singh, by virtue of his Indian background isn't a "real" Asian and Tiger, as someone who is mixed, who is referred to by many as an African American golfer even though he, himself, is careful to call himself mixed, has his Asian ethnic ancestry ignored, either because he doesn't "look" Asian enough or because being mixed he doesn't "count" as pure.

Anyway, I do applaud Y.E. Yang on his victory--two different friends called while I was in the car crowing about the win and what a great tournament it was, especially the last 4 holes. I wish I had been there to see it (it's just not the same watching the highlights). It is something to see two Asian-ethnic descent golfers in the final round of a major championship go toe to toe.
Posted by Jennifer at 10:41 AM