A friend who is also a product of the 80s recently asked me how I felt about John Hughes' untimely passing. And I said that while I was surprised at his sudden death at the age of 59 from a heart-attack, I didn't have a lot more to say. 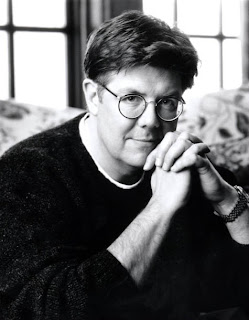 I don't mean that I was lying to my friend. I mean that I have been thinking about my love of John Hughes' films and trying to square my sentimental affection for them with my adult-eyes, especially looking at them through a lens that is critical of racial and racist portraits. If you grew up Asian American in the 80s, you can't help but be somewhat scarred by the racist portrait of Long Duk Dong. And while NPR did an interesting and thoughtful piece about this Asian stereotype, interviewing the actor who played him, Gedde Watanabe, there will always be this sting, at least for me, at hearing that awful gong sound and the entrance of this character upside down saying "What's happening hot stuff"--UGH. 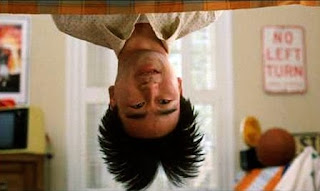 Yet I would be lying if I said I didn't love Hughes's films, especially the trilogy that came out during my formative teen/high school years: Sixteen Candles, The Breakfast Club, and Pretty in Pink. I was 16 when Pretty in Pink came out. There is a picture of me in a Jessica McClintock pink and white striped prom dress holding the album to Pretty in Pink. And I fancied that aside from a few key differences (I did not live on the other side of the tracks) I was just like Andy, misunderstood and waiting for my chance to leave my high school and spread my wings. 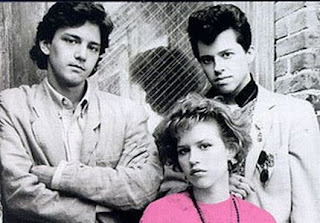 [By the way, in an effort at not doing revisionist high school history, especially since there may be a few old friends reading this, I was actually NOT the outcast/misunderstood artist. The celluloid portrait that more closely resembled my high school persona was Tracy in Election--the uber-type-A, closely wound, power-hungry bitch. We'll save analyzing that for another day]

I remember reading a movie review in our high school newspaper by a classmate named Shannon (I've blanked on her last name) that, in hindsight, was absolutely astute and insightful about the ways in which the movie emphasized an attention to heteronormativity, entrenched gender roles, and most especially, very disturbing racial stereotypes that falsely depicted Asians as foreign-accented fools (OK, Shannon probably didn't use any of the language that I just did, but the points in her negative review hit on all of those issues). I remember that after I read it, I felt relieved that the discomfort I felt in seeing Long Duk Dong was echoed by someone else--someone who wasn't Asian--and that made me feel better.

I look at the films Hughes' made. Ones I once loved. Ones that seemed to speak to parts of my own teenage angst. Ones that reflected, to the world, what a high school experience was like. And I look back and wonder how I could have been blind to the monochromatic cast of these films--of the ways in which, especially a movie like Some Kind of Wonderful set in Los Angles, the absence of black, Asian American, and Latino students was a huge omission. There is a scene in Ferris Bueller's Day Off where they are dropping off the porsche to a parking attendant and Ferris asks the darker, ethnic character whether he speaks English. I look at these films now, and I cannot feel the same way about them as I did then. 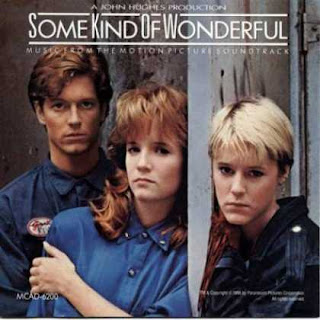 Which isn't to say that all my affection for them is gone. There are moments in these films that I think really did capture the awkward, anxious, angst-ridden world of teen life, the good, bad, weird, ugly, and beautiful. Because being a teenager wasn't always just one uncomfortable encounter after the other. I remember that I felt things intensely--that things were SO IMPORTANT then, that seem so trivia now. And Hughes' films understood that. Going to the prom wasn't just a stupid ritual of conformity, it was a moment that encapsulated so much about what some of us believed was the captsone moment of our high school careers. Easy to make fun of from the distance of 20 years, but harder in the moment to not feel like these moments mean so much. And Molly Ringwald was great at conveying the feelings embedded in those moments--when she comes out of the church and sees Jake waiting for her, when she goes to the prom by herself and finds her best friend Ducky there, when she has the heart to heart talk with her father. Those moments somehow made sense to me and helped me to make sense of my high school experiences as well. 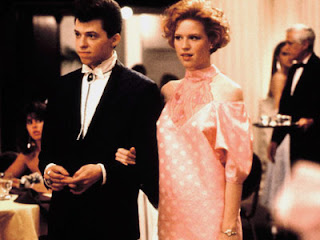 So how do I feel about John Hughes' passing? I'm sorry for his family, especially his sons. And I'm sorry for my teenage self. And I was moved when I read this piece by a teenage pen pal of Hughes, Sincerely, John Hughes. 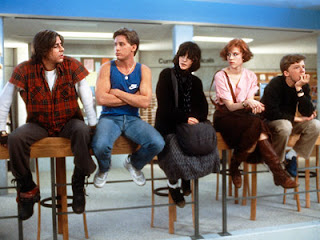 And maybe, just maybe, I'll go out and rent Pretty in Pink or Sixteen Candles this week and get in touch with the 16 year old part of me that still feels giddy putting on a prom dress for the first time or remembering what it was like to kiss the dream guy you've been crushing on for a long time. 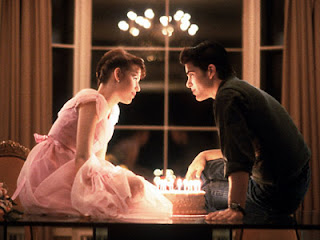 Email ThisBlogThis!Share to TwitterShare to FacebookShare to Pinterest
Labels: the passing of John Hughes, the racial and racist portraits of John Hughes' films, what John Hughes meant to me

I was in high school when most of these movies came out too. I loved them then and my teenage girls love them now, even though not one of the characters represents them. I never picked apart the deeper meanings of the charcters. I felt connected to them even though we had nothing but teenage angst in common. I am instantly back to feeling 16, giggly and free, when I watch these movies now.

I am black/multiethnic. I too enjoyed many of John Hughes films (Breakfast Club & Home Alone 1& 2 especially!). I was sad to hear of his passing. However, I often wondered why he occasionally set racist overtones in his films such as "Sixteen Candles" and "Breakfast Club". The obvious entire stereotyped Long Duk Dong and in "Breakfast Club" After being discovered shooting hoops in the gymnasium, John Bender informs the Principal that he's trying out for a scholashiip!(said in his best "black" lingo). Then there was the sneer in Molly Ringwalds voice in either "Sixteen Candles" or Pretty in Pink at the idea of one of her friends possibly dating "a black guy". And then there was the obvious NEVER ANY BLACKS (or at least that I can clearly recall) IN ANY OF HIS FILMS. I pray my Lord in Heaven that Mr. Hughes was not racist as I'm sure people of every culture enjoyed his work. And after all, money's only green.

I know this article is almost 4 years old, but I had to put my two cents in. I was in middle school when John Hughes' movies came out. I enjoyed "The Breakfast Club" & "Sixteen Candles". However, I also noticed the absence of people of color in his films (with the exception of Long Duk Dong & that one Black student that admires Samantha's panties in the bathroom with the rest of the guys) & I discovered that he omitted POC in his films on purpose.

I once read an article written by a Black guy about how much he grew up on & loved Hughes' films until he discovered that Lisa Bonet, from "The Cosby Show", had a meeting with Hughes that went sour. Actor Todd Bridges in his memoir "Killing Willis" described a similar incident with Hughes in a meeting as well. He told Todd that he did not see how he could put a Black person in his films. Needless to say, we never saw him in any of Hughes' movies.

I understand the "stick to what you know" meme, but he could have at least made an effort.

I don't think John Hughes was racist. I do think some parts of Hollywood is though. Todd Bridges was offered a role in Breakfast Club by John Hughes. When Todd showed up to audition, he was told by John Hughes partner, "We don't know how to write for Blacks." How about the same way you would for any other human being because we're really not that different and all of us are not a walking stereotype.

How about consider that many of us speak proper English, are highly intelligent and date outside the color box. Not sure what the big deal was but Hughes partner was certainly racist. "I'm sorry Mr. Bridges. I don't know how to stereotype Black folks the right way." Now I understand why racist material showed up in Breakfast Club and Sixteen Candles. Hughes should have dumped his partner. I think he was a very nice man but his partner needed serious help directly from The Lord Jesus Christ himself.