The Argument against "English Only" in the U.S.

If you haven't been living under a rock, and if you have friends who are Asian American, Korean American, or Korean (or just anyone paying attention to pop culture) then you have undoubtedly seen this video by Korean impresario PSY:

His song "Gangnam Style" is an international sensation--and you know it's really hit the mainstream when you can watch him on NBC's weekday morning program, "The Today Show":


Visit NBCNews.com for breaking news, world news, and news about the economy

What is so striking to me about his performance is that he's singing this song in Korean (there is the phrase in English "Hey, sexy lady," but every other lyric is Korean) and he's getting the crowd pumped up and THEY'RE SINGING BACK TO HIM IN KOREAN.  Granted, a lot of the people, especially crowded around the stage, look like they could be, themselves, Korean or Korean American.  But you also see non-Asians in the crowd dancing, and singing.

Which is pretty incredible--I mean, the U.S. is a pretty parochial place when it comes to being accepting or even tolerant of people speaking different languages.  The fact that PSY is singing in Korean and getting folks to sing along with him, in Korean, makes me so happy!  Granted, it's NYC, it's a global pop phenomenon, and that dance move he does (the horse dance) is sweeping flash mobs everywhere.  But still.  I'm a glass half full kind of gal, and I'd like to think that this marks a small turn in our language consciousness towards a more polyglot acceptance that being American does not mean that you only speak English or even predominantly speak English.
Posted by Jennifer at 8:23 AM No comments:

Email ThisBlogThis!Share to TwitterShare to FacebookShare to Pinterest
Labels: English should not be the only language spoken or sun in the U.S., Gangnam Style, PSY, The Today Show

This video really speaks for itself -- as the post title says, there IS going to be a moment when Jeremy Lin and Hello Kitty meet up--and for that alone, you should watch.

If Mixed Race America was a political party it would be ...

So as any regular readers of this blog will know, I am a proud Democrat who campaigned for Barack Obama in 2007.  In fact, my 3rd blog post is titled "Obama for President."  Which means that it's going to come as no surprise that I believe that if Mixed Race America were a political party it would be a Democratic party--THE Democratic party.

However, I also know that it's not true that every person of color, every multiracial person, is a Democrat.  Bobby Jindal, Michael Steele, and Marco Rubio would certainly disprove this idea.  Yet I can't help noting the contrast--an obvious contrast that Jon Stewart and Stephen Colbert have certainly milked on their respective shows--between the RNC in Tampa last week and the DNC in Charlotte this week.

This is a crowd shot of the RNC 2012 -- it's a photo I found that was part of this article, "Mia Love and Susana Martinez: RNC 2012 Showcased Diversity On Stage, But Not Among the Crowd."

There is a very telling quote from the above article:


Drury Hoover, a GOP delegate from Hope, Ark., said she noticed the homogeneity of the convention crowd. "Somehow we need to attract all of the people in the country, not just what is apparently the Caucasians," she said, gesturing toward the crowd. "Because there are seemingly few of any what we would call minorities. Not many of you who are Oriental," she added, referring to a Huffington Post reporter, "not many blacks."

[Aside:  Yes, apparently the GOP delegate from Arkansas believes that people of Asian ancestry in the 21st century should be referred to as "Oriental" -- since I've already ranted about this in a previous blog post, I won't repeat all the ways in which this phrase is tone deaf, except that imagine if she were talking about African Americans at the RNC and instead used the phrase "Negro"--'nuff said]

So even delegates at the convention noticed the overwhelming whiteness, confirmed in part by the fact that African Americans comprised 2% of the convention attendees.

And honestly, it's not just the lack of African Americans in the crowd--it's the lack of real diversity--of other racial groups (I've seen "Arab Americans for Obama" and "Sikhs for Obama" signs), of mixed race Americans, of proud and out queer people.

So because pictures say a thousand words, I leave you with images from the DNC.  I know it may be tempting to think that I've only selected images that show diversity, but if you've watched any of the DNC coverage, you'll notice that it's impossible to find a shot that is as homogenous as what was on display at the RNC.  And I haven't even selected photos of the prominent speakers that have graced the stage: Gabby Douglas & Gabby Gifford both led the pledge of allegiance (different days--although I joked that maybe you had to be named "Gabby" to get this honor), Tammy Duckworth, Kal Pen, Julian Castro, Craig Robinson, Maya Soetoro-Ng, and Deval Patrick. 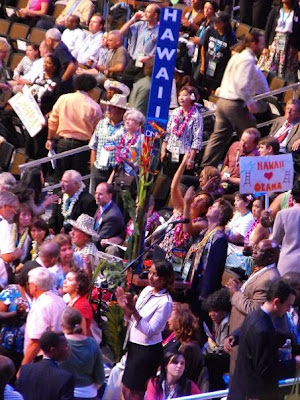 Finally, I just have to give a plug for the speech that Deval Patrick gave on the first day of the convention.  I know the media has concentrate on more high profile speakers like Michelle Obama (who was AMAZING) and Bill Clinton (whose charisma is so strong it came pouring out of my television), but in the middle of his speech, Patrick had this to say to the DNC base--and for any Democrat, for any liberal-progressive, for anyone who truly believes that the United States is and should be a mixed race America, they're words worth remembering and living by:


"If we want to win elections in November and keep our country moving forward, if we want to earn the privilege to lead, it's time for Democrats to stiffen our backbone and stand up for what we believe. Quit waiting for pundits or polls or super PACs to tell us who the next president or senator or congressman is going to be. We're Americans.

We shape our own future. Let's start by standing up for President Barack Obama."