I blame Tami. When she wrote about being in love (her words, really!) with the AMC show Mad Men (the 3rd season premieres August 16), I was intrigued. So I watched. And I was hooked.

I had been resisting the show, mostly because I just don't need another show to become addicted to--not that there are that many, but I'm a university professor trying to write a book, so really, the less t.v. I watch the more articles I can/should read, the sooner the book gets written (at least, in theory, that's the way it should work). But these shows have me hooked: Project Runway. Top Chef. And, of course, Lost. And now, Mad Men.

I had been resisting Mad Men for a second reason though--I didn't think a show about white men in the 1950s (it's actually set in the 1960s, the first years of the decade actually--JFK is still alive) at an ad agency would be appealing. But if you read Tami's astute post about the show you will see why I, and anyone interested in a history of race relations in the U.S., would be intrigued:

"What I most appreciate about "Mad Men" is that it doesn't attempt to create a historical drama with modern sensibilities. It doesn't turn the morays of the time into something more PC for modern audiences. The show presents things as (I imagine) they were and challenges the audience to judge characters by the standards of a bygone era. . . . A lot of "isms" were a part of American life in the early 60s. As I've explored several forum threads about the show, I've discovered that viewers are eager to minimize the way racism is deftly presented in "Mad Men." The sexism, viewers can digest. But mainstream society has come to an interesting place: Calling someone a racist is more disturbing than actual institutional racism. Short of witnessing a lynching, there is always some way to explain away race bias [emphasis mine]."

So if you are looking for a show to dive into, you can buy the DVDs of Season 1 and 2, information available on the Mad Men AMC website (they used to have the full episodes available, for free, but they seemed to have taken them down, for some reason--BUMMER). And definitely check out the premiere of Season 3 on August 16. And if you are already a fan, like Tami and like me, you can actually create a character and insert yourself into a Mad Men scenario, like I've done below: 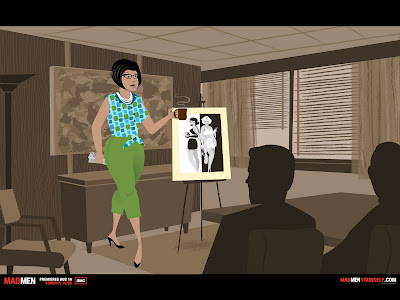 I call this scene "Speaking truth to power and educating men about the sexist images in corporate advertising." Unlike the show, I am going to exercise poetic license and imagine that if I were to enter into the Mad Men world, I'd be there as a MAD Asian American feminist. By the way, if you are wondering if this actually *looks* like me, oddly and eerily enough, it does--in fact, I own clothing very SIMILAR to the one that my mad-alter ego is wearing. Go figure.

Email ThisBlogThis!Share to TwitterShare to FacebookShare to Pinterest
Labels: if I were a character on Mad Men I'd insist on being seen as an Asian American feminist even though the phrase "Asian American" hadn't even been coined yet, Mad Men begins season 3 on August 16