In continuation of the series I'm doing in honor of APA history, I'm turning the spotlight on Asian American activism in the form of one particular activist: 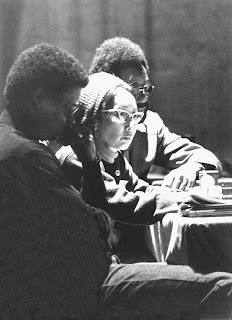 Yuri Kochiyama was born in 1961. She and her family were interned in Jerome, AK for the duration of WWII in an American concentration camp, and after the war, she and her husband, Bill, moved to Harlem, where they became active with a variety of social justice movements. Kochiyama is most famously known in activist circles for her friendship with Malcolm X and her work with his organization and other Civil Rights organizations of the 1960s and 1970s. There is a very famous photo of Kochiyama cradling Malcolm X's head right after he was shot--it can be seen in Renee Tajima-Pena's excellent documentary Honk if you Love Buddha or My America.

Kochiyama had a passion for social justice. In addition to working on Civil Rights with African American activists, she was active in anti-Viet Nam war protests, she worked with Puerto Rican activists agitating for Puerto Rican independence, she labored on behalf of Japanese American reparations for the injustice of the internment, and for general Asian American causes. And even today, when Kochiyama is in her 80s, she continues to be involved in educating younger generations about Civil Rights and social justice and to be active in protesting for causes she believes in, as the tee-shirt she wears below clearly indicates her support for social justice issues. 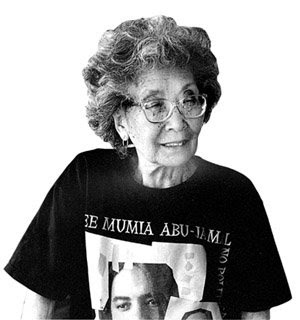 [for more on Kochiyama's life and activism, click on this link]

Yuri Kochiyama is an amazing woman--she is an inspiration because of her activism and the way she has always worked as an ally in various communities, ones beyond her own identity as a Japanese American/Asian American woman. And truly, that is what mixed-race America is all about--going beyond your own interests and understanding the way that we are all mixed here together--someone else's injustice is OUR injustice.

Thank you Yuri Kochiyama, thank you.
Posted by Jennifer at 9:12 PM

Thank you for this. Yuri is an inspiration to so many, yet sadly she has not found her proper place in the history of the Movement. Perhaps with time that will change. I hope so...

Thanks for stopping by Patrick. And I agree--I think Yuri deserves many more accolades and much more recognition than she has generally received. I do think that within certain communities--Asian American studies, various activist circles, anti-racist organizations--she is appreciated and heralded as a true pioneering force of cross-racial/ethnic alliances. Perhaps more people in the future will be inspired by her example. I hope so.

I wrote the 1st draft in '00 & have tried unsuccessfully to meet Yuri, whom I idolize...until last week when someone gave me her address and I went to visit her unannounced. Yuri is famous for not seeing visitors w/o an appt. but when she heard I'd written this play, she was thrilled and invited us into her home.

A local Filipino American actor, Jean Franco, came w/me because he was dying to meet Yuri. He performed a monologue for her & she was obviously moved.

Yuri has an amazing generosity of spirit. She called me afterward to tell me how much she loves the script & she's not only coming but inviting the other surviving "crusaders."

I'd read her autobio, watched "Passion for Justice," and longed to meet her...but nothing prepared me for her warm, big-hearted charisma. For years, I let the play sit in a drawer because I'm a Russian-American-Jewish woman and not Asian, so who am I to try to write about internment? Then I read that she had similar apprehensions re meeting Malcolm X, & that gave me courage.

I second your emotions in this blog. Yuri is an international treasure! Thank you for keeping her name in the public eye.

Marian, your comments inspired me to write a whole post on the topic of allies--check it out (today's date is November 15, 2008). Wish I could see your play--so glad you got to meet Yuri Kochiyama--I'm envious!

Hi, Jennifer: Here's the scoop on our production in SF. Yuri Kochiyama attended. We've got photos, etc. which I'd love to post to your site or you can visit the links in this account. Asian Week gave it a good write up. Reception has been enthusiastic.

On Nov. 17 and Dec. 1, an all-Asian American cast graced the stage at San Francisco’s The Marsh Theatre to perform 20 minutes of scenes from playwright Marlan Warren’s World War II internment play Bits of Paradise, and made some history of their own.

The seven actors took the audience back in time when 20-year old internee Yuri Kochiyama (born Mary Nakahara) started a letter-writing campaign to the Japanese American 442nd regimental combat team to raise the men’s spirits. The girls and women called themselves “The Crusaders,” and the play--an ode to Kochiyama—came alive as actors read verbatim excerpts.

“I feel a sense of pride and a sense of identity,” said Filipino American Jean Franco who portrayed one of the soldiers. “I wouldn’t have known about this part of history if I hadn’t done this project.”

Kochiyama called the play “unique” and “creative.” She stated, “What this play captures of World War II Nisei soldiers and the teenage camp Crusaders who corresponded with them is awesome.”

Although Warren wrote the first draft in 2000, she was only able to make contact with Kochiyama recently. “The material has lots of humor and flirtation,” said Warren. “Most people are surprised when they find out it’s verbatim. But afterwards, Ruth turned to Yuri and said, ‘That’s how it was…remember those G.I. Joes?”

Udo wrote “Bits of Paradise places its footprint on the timeline of a much needed theatrical examination of the Asian American journey.”

Warren is seeking a theatrical partnership to help craft a full production. “Until now I haven’t had access to the original writers of the letters. I hope to expand the roles of the women whose more personal letters and experiences were previously unavailable to me.”

Warren said, "Thanks to The Marsh's works-in-progress series, I’m now able to connect with interested theaters and get the word out about the play.”