Whenever I teach my introduction to Asian American literature class, I show a map of the U.S. to my students and then I show them a map which has the Hawaiian islands in the Pacific. 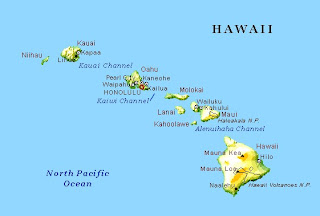 [if you want to see where the Hawaiian islands are in relation to the continental U.S., simply click on the "Feedjit" map on the right]

And I ask my students WHY Hawaii is the 50th state?
Answer: sugar cane

Well, maybe that's too simplistic an answer. But sugar cane was certainly the main industry that brought immigrant labor, particularly from China, Japan, the Philippines, and Korea, into the Hawaiian Islands. 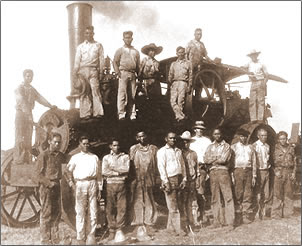 [photo of Asian immigrant laborers on a sugar cane plantation]
And U.S. sugar interests led to U.S. imperialism in the form of the overthrow of Queen Lili'uokalani, the last reigning monarch of the Hawaiian islands. 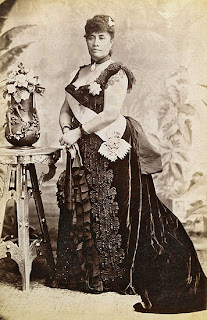 And because the U.S. saw the Hawaiian islands as a useful outpost for their military interests in the Pacific, they built a base in Honolulu, and ... well ... you all basically know the rest. By 1959 Hawaii became the 50th state in the union.

But that's not the end of the story. Because the indigenous population of Hawaii, the Hawaiian people, have been agitating for independence. 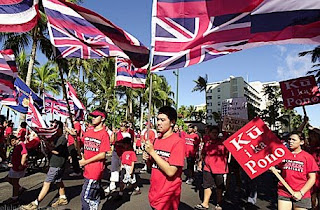 [For more on the Hawaiian independence movement, click on this link]

Hawaii is not simply a vacation paradise. Nor is it a crucial outpost for U.S. military intervention in the Pacific. It does happen to be the only state that has a non-white majority (over 64% of the population, predominantly Asian Americans, or as they are referred to in Hawaii, the Asian-settler community). And it is also the home to indigenous Hawaiians who are actively preserving their culture and agitating for independence.
Posted by Jennifer at 8:57 PM

Thank you for bringing this to our attention - I hadn't known anything about their desire for independence (although I can't say I blame them!). That's pretty awesome :)

Yes, there is a Hawaiian independence movement, although I don't think they've gotten very far, politically speaking. I do know that a process that indigenous Hawaiian groups are working on is being recognized as an indigenous population, similar in status to the way that various American Indian groups are recognized in the U.S., which will allow Hawaiians to have more autonomy and control over both land and resources in the Hawaiian islands--I do hope they succeed in gaining back a measure of control over their lands and governance over the islands.

As a resident of Hawaii, I appreciate your introduction to this topic. This controversial issue has been simmering for some time. At first I was worried about how you were going to handle it but am relieved that you seem to have a fairly good grasp at the situation. Have you done any research about the Hawaiian Sovereignty movement or the Asian Settler stance?

Thanks for leaving a comment. I guess as a professor who teaches Asian American literature (and teaches novels set in Hawaii by local writers) I've become familiar with the history of Hawaii. But I would say that I have a good grasp but not a thorough knowledge of the Hawaiian independence movement--although I do wish them luck and hope that they can gain back some sovreignty--I'm skeptical about the U.S. government ceding total control because, lets face it, it's just not going to happen (and it opens up all doors for things like California and parts of Texas reverting back to Mexico). Anyway, thanks for stopping by!