May Day Flowers and Dissent

Today is May 1, May Day, which I learned to celebrate as a kid by making construction paper baskets, filling them with flowers we picked at our elementary school, and then dropping said baskets off at neighbors' doorsteps, ringing the bell, and running away.

When I recently told some friends about this practice, they told me my school teacher had made me into a delinquent, because they had never heard of this tradition.

But thanks to wikipedia, I was vindicated:

"In some parts of the United States, May Baskets are made. These baskets are small and usually filled with flowers or treats and left at someone's doorstep. When you ring the bell, you are supposed to run away. The person receiving the basket would try to catch the person running away. If they caught the person, a kiss was to be exchanged."

In addition to the flower baskets (and the ditch and dash, which I suppose is much nicer than finding other things on one's doorstep) May Day was often associated with dancing around a May pole, flowers and, generally speaking, was regarded as a fertility festival. Here's a photo from the University of Missouri archives showing such a tradition in 1911:

Of course the other association with May Day is International Workers Day. Unbeknownst to many, May Day as a day honoring laborers and the 8-hour work day began in the U.S. after the Haymarket riots. Of course those very American roots were forgotten in the 1950s with the red scare of communism: 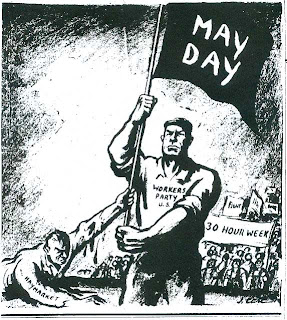 One of the traditions associated with May Day as international labor day is to recognize the contributions of the working class and to offer up dissatisfaction with one's government, especially around issues of social services.

So let me celebrate May Day with flowers and dissent. First the flowers: 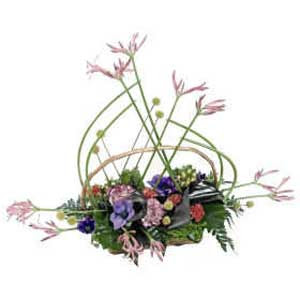 And now the dissent:

Happy May Day everyone, and try not to get too confused by leaving dissent on someone's doorstep and running away and spouting flowers--although that would be a sight to see.
Posted by Jennifer at 1:14 PM

Email ThisBlogThis!Share to TwitterShare to FacebookShare to Pinterest
Labels: dissent--the most American act you can make, International workers day, May 1, May Day traditions

Why, thank you! I love flowers.