Not too late to do the right thing

On Sunday, May 18, 2008, about 200 Japanese American UW students, who were forced to leave the university and face incarceration during WWII, were granted honorary degrees. 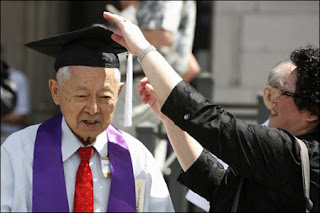 [Tip of the hat to Angry Asian Man]

Most of the graduates are now in their 80s, but as Norm Mineta, the keynote speaker who was former Secretary of Transportation and a former internee himself said, it is never too late to do the right thing. Here is an excerpt from his commencement speech:

For more on the graduation, click on this link. I had tears in my eyes when I read it. Because it's true--it's never too late to do the right thing. It's never too late for us to remember that we CAN do something--we don't have to just sit back and say, "There's nothing I can do." The faculty and staff at UW who helped make this graduation ceremony possible should be commended. Because they didn't have to do this. But it was and is the right thing to do. Which makes me wonder, will our current administration ever be brave enough to admit its mistakes and apologize? Will we recognize, much later, the harm we've done to others--the racial profiling we do to anyone of Muslim or Arab descent--anyone who "looks" Middle-Eastern?
Posted by Jennifer at 9:42 AM

Kudos to UW for finally coming thru.