Doing the right thing: a history of California's marriage laws

I was all set to write a post about the Cable Act (will return to this in a moment) when I heard the great news last night that the California Supreme Court overruled a previous ban prohibiting gay marriage. 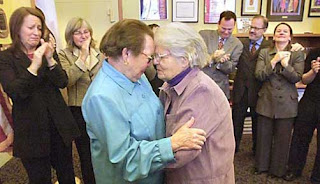 [This is Phyllis Lyon and Del Martin, who were joined as "spouses for life" at SF City Hall on February 12, 2004. Unfortunately, their union was nullified in August 2004 by the California Supreme Court. But thanks to yesterday's ruling, their marriage will once again be validated by the State of California.]

When Gavin Newsom was interviewed on CNN and asked why the Supreme Court could do this when the majority of voters in California had approved a state law in 2000 codifying marriage as being between a man and a woman, Newsom invoked California's anti-miscegenation laws of the 19th and early 20th C. and quite astutely noted that if Californians were polled in 1948 about whether they approved of marriage between people of two different races, a majority would have voted in favor of prohibiting miscegenation/inter-racial marriage. Yet clearly history has shown that the will of the majority does not always make things right, and that legally the RIGHT thing to do was to abolish such laws--to allow people to marry whoever they want.

And this is SO TRUE.

Once upon a time, there were anti-miscegenations laws that prohibited marriage between people of different races. Actually, it was more specific than that. Most anti-miscegenation laws didn't really care if African Americans married Latinos or if American Indians married Asian Americans (or, if we are going to keep to the language of the 19th and early 20th C., they didn't care if blacks married Mexicans or if Navajos married Chinese). Instead, the majority of laws were specifically designed to ensure white purity and to punish any transgressions of white Americans crossing the color line.

One of the most shocking results of this adherence to the color line was in the Cable Act (1922-1936):

The important point to note in this quote is that the ONLY race and hence only aliens "ineligible for citizenship" were Asian immigrants--which in this time period meant predominantly Chinese, Japanese, Korean, and Indian people. Thus, our country's earliest anti-miscegenation laws specifically targeted Asians--using not just the Cable Act but anti-miscegenation laws to prevent Asians and whites from marrying.

Thankfully, as Mayor Newsom pointed out, the Supreme Court of California was wise enough in 1948 to realize how unlawful anti-miscegenation laws are:

In Perez vs. Sharp, the California Supreme Court rules against anti-miscegenation laws, stating that they were based on racial distinctions that were "by their very nature, odious to a free people."

[For more on a timeline of events that influenced inter-racial marriages, click on this link, which is the same site that I found the quotations above.] 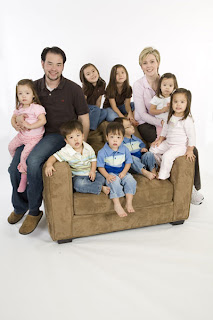 And if it hadn't been for the repeal of The Cable Act in 1936 and California's anti-miscegenation laws in 1948 (and the repeal of the nation's anti-miscegenation laws in 1967), we never would have a family like Jon and Kate plus eight (you have to imagine that in the mid-1930s this image would have scared the hell out of some folks. Actually, I'm sure this image scares the hell out of some folks now).

Most rational folk take for granted inter-racial marriages. Even people who wouldn't necessarily want their son/daughter to marry across the racial divide would be hesitant to turn back Loving vs. Virginia, understanding marriage to be a private affair between two consenting adults.

And I hope that one day in the not so distant future, this is the attitude our society will have about same-sex marriage. That the whole idea that once-upon-a-time people actually tried to pass laws restricting marriage on the basis of sexual orientation or gender was LUDICROUS and THANK GOODNESS we no longer live in the late 20th C. when such draconian and antiquated ideas about love and marriage were in place.
Posted by Jennifer at 6:54 PM

I have had an opportunity to read thru your blog...well...this first entire page. I am bi-racial (Chinese/Black), my husband is bi-racial (Filipino/Black) and my children...are OUR little mixed race americans...

I love the insight in your writing style and I will definitely have to add this site to my blogroll. I notice as I've gotten older, culture and heritage have been playing a larger roll in my life and the lives of my children.

Thank you for a job well done...

While killing time at work on Thursday, I read several articles about the California ruling. I never understood how a same-sex couple - let alone a same-sex couple deciding to get married - actually affects the daily habits of 'traditional' couples and mindsets to begin with. Your post gives much more insight to how the state and Gavin Newsom found the ban unconsitutuional and ever-so-wrong to begin with.

I see it this way, my fellow straight folks haven't done such a great job with the sanctity of marriage. There are plenty of homosexual couples would would probably honor those vows better anyway.

I wonder now if my home state will follow suit, considering the contrasting cultures between those upstate and downstate (NYC and the surrounding areas).

That girl tam,
Thanks for stopping by, for leaving a comment, and for the compliment--I blush!

Please feel free to leave as many comments as you like. I find your observation about kids and culture to be really true.

Jason,
I really don't know where the fear/anxiety and downright hatred is coming from. I mean, as you so astutely note, it's not like straight folks have been doing such a stellar job with marriage. The truth is, marriage is HARD and requires a great leap of faith.

It also seems like if anti-gay marriage groups want to make the argument that same-sex unions will lead to the instability of society, it is completely illogical--because marriage as an institution is one of the most conservative, traditional, and entrenched institutions we have. If we want to stabilize society, we should insist that EVERYONE be married.

Of course, it begs the question: just what does a stable society look like? Certainly one in which we are waging war overseas, levels of poverty rise, educational opportunities are shut off for certain constituents, doesn't seem very stable, and I'm not sure we can pin this on gay people wanting to get married...

Crazy isn't it? The government setting rules about who is worthy to marry and who is not? And that it still happens today!

Lebanese women have been demanding more rights for themselves and their children b/c Lebanon has a law that any Lebanese woman marrying a foreigner not only loses HER citizenship, but her children aren't considered citizens. Lebanese men though can marry foreign women and their children are considered Lebanese. Many other Middle Eastern countries like Saudi Arabia have the same law (A college professor of mine who was from Iran was married to a Saudi woman, but her government didn't recognize their marriage as valid, so they live outside her home country)

Oman has a law in which their citizens can only legally marry other Gulf citizens, and even then you need permission (But from what I hear, it's not really enforced...but if an Omani citizen marries a foreigner, they may have difficulty finding a government job)....

Sadly, it still exists in other countries....I hope a new precedent is set in Lebanon and Lebanese women keep fighting, and it will inspire other women to demand more rights from their governments.