I'm not terribly well traveled, but I have to say that the few times I've found myself in what I'll call typical "tourist" spots (and I guess I'm thinking of places like Key West, Cozumel, old Athens around the Acropolis) I find there is this odd tension between wanting a place to be "authentic" and to have people experience the culture as either part of its local charm (the relaxed atmosphere of the keys), or something exotic (the Mexican Caribbean flavor of Cozumel) or part of an ancient past (old Athens) with trying to SELL you this image--the vendors that swarm around you and hawk wares at you in these places.

I found this to also be true in Jamaica, at least in the more "touristy" spots that we visited in Ocho Rios and Montego Bay. The places we went to in Kingston and Port Royal weren't places many tourists would go to (or any really because so many people are told how violent Kingston is, we didn't see a whole lot of tourists, or at least not American toursits, hanging out in Kingston--we did find some German and Australian and black American tourists, but aside from a few businesspeople, no white American tourists). But Ocho Rios is THE major cruise ship destination in Jamaica, and Montego Bay is THE airport that tourists fly into, either to stay or to head to Ocho Rios or Negril (there are 2 major airports in Jamaica, Kingston and Montego Bay and basically you fly into Kingston for business or because you have family--if you are a tourist, you stay on the north shore and fly into Montego Bay, which is literally on the opposite end of the island (North West vs. South East) from Kingston).

And the problem for me was feeling like I was a tourist but also not a tourist. Actually, I didn't have a problem with being a "tourist" in certain places, because I don't have family here and didn't grow up here and because as a relatively privileged American, I do have an income that allows me to travel and stay at nice hotels and not worry about eating out (and unfortunately for the Jamaican dollar, the exchange rate was 70JMD to 1 US). But the rest of my family wanted to be treated as locals--especially for my cousins who were born and to some degree raised in Jamaica (the oldest among them left when he was 7) they were pretty offended, at times, to be mistaken for tourists and insisted on being given "local" rates--or poked fun of those "other" tourists who didn't know that there were 2 rates or who didn't know where to get the authentic Jamaican food (this we did in one case by going into the town of Port Royal versus eating at the hotel restaurant).

But despite my cousins telling me not to, I continually overtipped wherever we went, left money in the hotel for the cleaning staff, and didn't try to bargain too much for the few souvenirs I picked up. Is it my overengaged sense of class privilege? Is it because I KNOW that I can't pass as a local (my family were continually joking that I should keep my mouth shut in certain places because while most of my cousins have Jamaican accents and can speak patois, I can't, so I'd be a dead giveaway)? 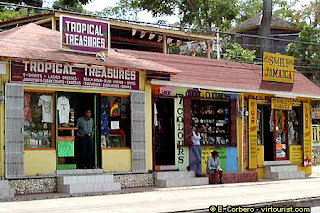 The truth is, I'm not a local. There was so much of Jamaica that seemed very touristy to me--packaged for people who wanted a comfortable "Island" experience--but there was also a sadness, for me, to go to a crafts area and be bombarded with people who were shouting, "Miss, Miss, come look at my stall" and to see stall after stall of these trinkets and wooden souvenirs and the colors of the Jamaican flag splashed everywhere and to have these people vying for your attention to sell you something to take back to put on your coffee table. Part of me wants to say that this isn't the "real" Jamaica. But you know, it is. People selling trinkets IS part of the real Jamaica. People urging you to come into their shop--to try to sell you something--the need to sell you something--that is part of the way that Jamaica operates as a country utterly dependent on tourist dollars.

As much as I wanted this trip to be about a type of "homecoming," I am a tourist. As much as I have family who grew up here, I'm not accepted as a Jamaican--not at least without a lot of explaining, and it was one of the things that did make me feel my difference from the people who grew up and lived in Jamaica--at the end of the trip, I left with my blue passport.
Posted by Jennifer at 3:05 PM

When I went to Jamaica (as a historian, doing research in Kingston and Spanish Town) I did go to Port Royal, but that's because I like to see the places I write about. But I've always found Jamaica a strange place -- there is a Jamaica that is very real (as you note) geared for tourists; but there's also another Jamaica -- where there are farms, businesses, schools, etc. and I felt as white American it was almost impossible to get to. The closest I came was going to church on a Sunday morning.

Susan,
Thanks for your comment--I do think that there is something elusive about Jamaica, and I've been trying to puzzle out the racial aspects of it from the class and national aspects. There were times when I did feel completely "at home" in Jamaica, but those were the times with my family--their own comfort and familiarity and literal family in Jamaica made it possible for me to see parts of the island that tourists or non-Jamaicans don't see.

I think part of it has to do with access and familiarity. I wonder if you had been able to live for 3 months or so in Kingston or New Kingston and to have friends who were born and raised in Jamaica take you around Kingston, whether your own sense of the place would be changed.

Which also leads me to wonder how much any of us ever get to know a place when we are there only briefly. I mean, I spent 3 weeks in Greece and a week in Turkey, but I stayed in Athens and Lesvos in tourist areas, so the degree to which I got to know Greece, at all, is completely mediated by this "vacation" aspect--as for Turkey, I got to know part of Istanbul, but certainly that's such a small sliver of the rest of the country. And even had I toured the entire land, I am an American tourist so, like your experience in Jamaica, I don't know how possible it would have been for me to feel like I was part of the people there. I guess what I'm saying is I wonder how many of us actually feel like we get to really know or really get into another country?