Leaving for my mother's land

Tomorrow I leave for Kingston, and I am anxious. First of all, I hate to fly (the noise, the cramped quarters, the disequilibrium). But really, I am not sure what I will find. For so long, Jamaica has loomed in my imagination, but in a way different from what people probably imagine.

My guess is that many people have one of these two images in mind when they think of Jamaica (or perhaps they have both). 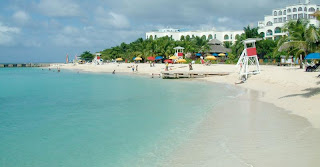 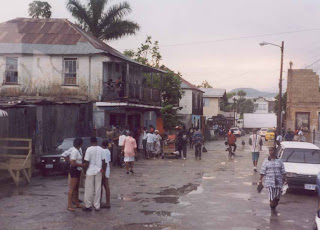 But my own idea of Jamaica based on the stories of my mother and other relatives, is more prosaic than this, and is rooted in the past--a Jamaica of the 1950s and 1960s rather than the present day Jamaica (most everyone left in the mid-1970s in my family).

Which means, I suspect that the Jamaica of my family is more in line with this image:

This is a picture of north Kingston. It probably looks like a lot of places in the world. And I think that's the point. My family lived a fairly middle-class existence. They weren't rich but they could afford to send all the kids to Catholic school. They had a home that had chickens and goats and other animals and they killed these animals for food. And my grandfather was a baker who woke up at 4am (and my mother had to be up at 5am to open the gate for my grandfather) everyday.

Although both my parents are immigrants and part of a larger Chinese diaspora, my mother's immigration from Jamaica rather than China places her, culturally and until her naturalization, nationally, in a different position than my father. I grew up for a long while believing I was Chinese Jamaican. I stopped using that as a "label" to describe myself while in college because I started to think differently about race and ethnicity and culture.

But now that I've become someone immersed in these issues, I'm not sure how I feel about being Chinese Jamaican American. I suppose my reluctance in claiming this identity is partly the fatigue of having to explain this background--and especially in grad school, I didn't want to exoticize myself or my family--and that's what tends to happen when I mention that my mother was born and raised in Kingston. People get really interested because it seems like such an anomaly to have Chinese in Jamaica. Whereas for me, this is just my family, and I don't always want to turn my family into a "story" just as, I'm sure, they don't want me to turn them into a blog post or anecdote about how multicultural or multiracial we are.

And yet, as an academic, as someone interested in the construction of identities, I can't help but wonder what I will discover, not about Jamaica but about myself and my relationship to Jamaica and to my mother's past and to my family. I never wanted to go to Jamaica until I could go with family members who would be able to show me the Jamaica of their past. I didn't want to get stuck at a resort on the North shore--I wanted to see the country and experience it, as much as I could, the way my mother would have experienced it.

But at the same time, I know this is an impossibility. The passage of time, the changes in the nation, and my own distance from this culture--my own ignorance over Jamaican culture and customs, makes shadowing my mother's younger self impossible.

Still...I am curious and eager if anxious to discover what kind of relationship and memories, of my own, I will develop of Jamaica. I guess I'll just end by saying stay tuned, because I will end up writing about this when I return in a week.
Posted by Jennifer at 11:01 AM

I think travels to places where we have some kind of connection are always fascinating, and considerably more complicated than simply doing the tourist thing.

Have a great trip; I can't wait to read more about it!

This is a great post. I don't have much of substance to add except..."Safe travels, Jenn."

I look forward to reading more when you return.

You have an interesting blog. I found it by accident when I was Googling "mixed race". Here's my slightly impolite take on mixed-race identity, posted on my blog. Anything that sounds offensive in my blog is strictly tongue-in-cheek. Half-Breed Mongrels of the world, unite! Cheers.

Sang-shil & Tami,
Thanks for the well wishes and support. It has been an illuminating trip and I'm still trying to work through it all.

Sad Commentary, glad you found your way to this blog.