The Color of Poverty

One of the things I've been trying to sort out, post-trip, are the dynamics of race vs. class vs. nationality that I experienced while in Jamaica. There were moments I felt very connected to Jamaica--when we literally re-traced the family's life in Kingston (more on this in a future post) but there were also moments, as I described yesterday, where I was acutely aware of being a tourist--or at least being perceived as a tourist (the question of whether I came to Jamaica as a tourist is one that I've wondered about. While it wasn't my intention to be a simple "tourist" the fact remains that my family and I did do typical tourist things--visiting Port Charles, climbing Dunn's River Falls, going to Doctor's Cave. Does our "family" status undercut this?)

I felt my tourist, or "outsider" status (because lets face it--that's what we really mean--tourists don't belong--they aren't locals--they don't call these places home--they leave) most keenly when I became aware of class differences. And you'd have to be really clueless and live in a state of willed denial not to be aware of huge class differences both within Jamaica and between Jamaicans and tourists/non-Jamaicans.

As my cousin "W" said, there is no middle-class in Jamaica: there is the poor and the wealthy. I did challenge him on this, pointing to the visit we had made to his aunt "P" in Portmore, and he did conceed that while "P" was hardly rich, according to Jamaican standards she was part of a lower-middle-class, especially when compared to people living just outside Portmore in shacks along the water--literal shacks made from discarded housing material and trash. But my cousin's point is also well taken--the economic divide in Jamaica is great--there are these huge homes in the hills of Kingston (see below): 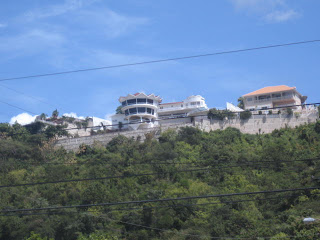 The homes in Ocho Rios are even more spectacular--there was one that was built to resemble a cruiseship!

Then there are these more modest, middle-class homes in Kinston--the one below came from a neighborhood adjacent to the one my family grew up: 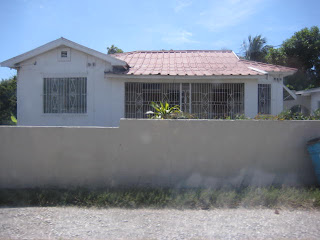 In many ways, these homes resemble subdivisions in California or any other middle-income housing tract in the U.S. Although the bars on the windows are a clear indication of the level of crime throughout Kingston. In fact, it was rare not to see any home without bars and gates and walls--only the shanties, many visible from the road, like the one below, which I saw on the way from Ochio Rios to Montego Bay, don't have bars and gates and locks: 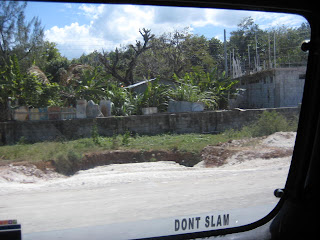 And the economic disparity between tourists/outsiders and locals is also glaring--the cabride from our hotel in Montego Bay to the airport was 5 minutes long--we probably could have walked if we didn't have so much luggage. The cost was $700 JMD, which was a total rip-off by most standards, but this is one of the few ways taxi drivers make any money. And I found myself hesitating to give our driver a $50JMD tip--which is about 75cents--and of course I gave it to him and then chided myself. But it is easy to get caught up in feeling like you are being ripped-off as an American tourist. But that's the point--it's my money to give. The local taxi drivers and souvenir shop owners have to try to make as much as they can from the tourists because it's their livelihood. And it's sad when you get into a mentality, as an outsider, when you feel you don't want to give a 75 cent tip because you're being ripped off by the taxi fare.

One last thing: the picture of the shacks that line the road on the way to Montego Bay (and which line the roads all over Jamaica really) look very similar to the shacks that line the highway leading from Hong Kong to Guangzhou and that you find traveling along the Yucatan peninsula and overland from Istanbul to Athens. Poverty looks eerily similar, whether in the Caribbean, Asia, Europe, or I dare say the U.S. I'm not sure what color poverty is, but I know it's not green.
Posted by Jennifer at 10:38 AM

The price of cabs is very frustrating in the Caribbean, especially since you know perfectly well that local people might even walk that distance but everyone will say it's a bad idea for a visitor. I try to console myself that I'm pumping money into a developing economy, but that only lasts a little while

Poverty looks eerily similar, whether in the Caribbean, Asia, Europe, or I dare say the U.S.

I missed this line before. Yeah, I found the same thing when I went to Central Asia. Those cheap sandals that people wear? same all over. The big sharp-edged concrete ditches lining every street, with rough bridges? not a Caribbean thing, just a drainage-system-in-an-underdeveloped-country thing.

What was interesting, being in Central Asia, which I couldn't help comparing to the Caribbean, was how the Soviet system had established rather better infrastructure than British-colonialism-plus-30-years-independence. The sense of hustle in the post-Soviet economies, and the money floating around, was also markedly different from the Caribbean.

Dance,
Thanks for your comments here (and above in the multiracial post). It sounds like you've done a fair amount of traveling in developing nations, esp. the Caribbean.

And maybe it's this--that I have this privilege to even worry about all of this?

Yes, the privilege to worry about such things is huge....

I've not done that much traveling--the Caribbean and Central Asia is about it--and I'm heading off to the Caribbean next week to stay in a very shiny resort hotel but to try to eat cheap, which will be interesting. In Central Asia I was traveling with someone who was returning to visit after doing development work there, so we were rolling first-class expatriate style in a bunch of ways--but also living in fairly middle-class accommodations.

I've also pretty much settled on the attitude that to pretend I'm not an American tourist, rich by the standards of developing countries, is condescending and presumptuous. So I tend to focus on *not* being the annoying type of American tourist, aiming mainly for respect. There's a difference between, saying, agreeing to pay for a taxi and being snotty about how run-down the taxi is. I might eat in fancy restaurants sometimes, but when I eat local food, I accept that I have to adapt, not demand American standards. I did cross the line once over some Central Asian ketchup, which was god-awful and I couldn't help exclaiming about it.

It was especially tough when I was a grad student, when I really was counting every penny and not getting ripped off *mattered* to me--yet that didn't erase the fact that doing research in foreign countries is a luxury by any standard.