Today is Super Tuesday, a major date for voters to winnow out the field of 2008 Presidential contenders in both parties. (today is also Mardi Gras and International Pancake Day).

And my appreciation of the day leading up to Chinese New Year is that I appreciate that this election season, among the Democratic contenders, we have the choice between electing a white woman and an African American man. 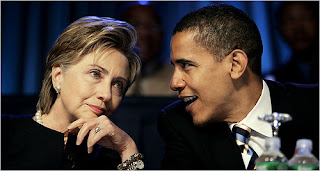 I appreciate the political change that this signals. It is easy to get swept away by rhetoric and easier to feel cynical about U.S. politics. But no matter what party you are voting for or which Democratic candidate you are supporting in today's primary (if you live in a Super Tuesday state) the fact that there is a choice beyond selecting a white man to be our nation's leader is historic, momentous, and quite frankly long overdue.

I support Barack Obama--so much so, and from such an early date, that I actually went door to door in 90 degree weather (with a heat index of about 100 because this is the South) in June to hand out leaflets and talk about why I believed in his candidacy. It seemed, at the time, a bit premature, a bit naive, and a bit silly. I wondered why I was doing this--handing out literature to people who clearly thought I was crazy (although they were all polite and some even offered cold glasses of water, which I really appreciated). I mention this story because for the first time I felt excited about a candidate and wanted to DO something.

And after Super Tuesday is over and after the Democratic National Convention this summer, I will again go door to door and make phone calls and do whatever I can to support whoever the Democratic candidate is. Because even if it's not Obama, it will be Clinton--and while she may not be my first choice, I also think she will make an outstanding commander in chief, and she's also part of this historic moment.

We need political change right now. And we need to believe that we can DO SOMETHING to bring about that change. I have to believe that I can work for the country I want rather than sit back and bemoan the nation I am left with. It does take work--it's not going to happen with empty rhetoric. But it can happen. After all, just look at the photo on this post--did anyone ever imagine the day when we'd have this choice?
Posted by Jennifer at 10:27 AM