Apologizing for the racial gaffe

This semester I'm teaching a grad seminar on race and cultural studies in contemporary America, and one of the things I emphasized was that despite the amount of reading I've done and research I've conducted and despite the fact that I've taught both grad and undergrad classes on various racial topics, I'm really not a race expert. In fact, no one I know is a race expert. It's just too slippery a concept--it's like nailing jelly to the wall (a phrase I've stolen/borrowed from a dear colleague of mine in History--don't you love that expression!). Race is such a flexible, fluid, changeable concept. I think the best that any of us can hope for is to educate ourselves, continually, and to be open to admitting that we will all make blunders when it comes to racial sensitivity.

And yes, I have made blunders. I think it's important to share them with all of you, because if I'm going to call myself an anti-racist ally and educator, I have to own up to the moments when I make mistakes. And perhaps something we can all learn from is how to deal with that OH NO moment when you realize you've said or done something insensitive--how do you recognize that moment, make amends, and move forward?

So I'll share a story with you, that may seem very mild to completely inoffensive to some of you, and for others it may seem totally out of line. What is important to know is that I recognize it for being racially insensitive.

I was having lunch with two colleagues--one a friend in the same department as me who is Latina and the other, a new post-doc who is American Indian. I had met the new post-doc once before--I'll call her "J"--and I wanted to introduce her to my friend "L" since "L" and I had gone through the same post-doc program that "J" was currently in. We also all work and teach on issues of race/ethnicity. I'm setting the scene to indicate that anyone who was at this lunch would have been aware of racial issues--we were three women of color who are racial minority faculty who teach on racial matters. So when I talked about the hiring priorities at Southern U.'s law school, guessing (since I'm not part of their law school faculty) that replacing a critical race theorist who had left years earlier was "low on the totem pole" for them, I was clearly forgetting who I was with.

The minute that expression was out of my mouth I quickly realized the insensitivity of that remark--saying it in front of my new American Indian colleague. ACK!

"J" didn't bat an eye. Neither did "L." We continued our conversation, and I wondered, feeling slightly panicked, whether "J" was just being nice or wondering if she didn't feel comfortable confronting me, for a number of reasons. I thought about saying something at various points through the remainder of our lunch, but somehow I just didn't know how to return to that moment--and I didn't know whether it would make "J" feel more uncomfortable if I brought it up. And I wondered if, perhaps, it wasn't as offensive as I guessed it was. In other words, I was continually rationalizing my silence at what I knew to be an offensive comment.

I got home and thought about it and realized that I needed to do and say something. So I wrote an email to "J" and as directly and simply as possible I apologized. I told her I didn't have a good excuse, only that I recognized, right after the words left my lips, that it was offensive and racially insensitive of me. And that I would be better, in the future, to excise that expression from my lexicon. I didn't try to overly apologize. I didn't talk about all the American Indian friends and colleagues I knew or the novels and films I had seen featuring American Indians. Or my sympathy and understanding of the plight of Native Americans. I acknowledged my remarks as racially insensitive. I apologized for saying them. I told her I hoped we could have lunch again in the future.

And what was "J"'s reaction? She actually said she had no recollection that I had made that remark! She literally didn't hear it (perhaps she was subconsciously tuning me out and giving me a pass?). She also said that she appreciated my apology and recognized that it couldn't have been easy for me to do it.

I wish I could say she was wrong--that I didn't hesitate to send her that email message. But I did hesitate. I did wait. I didn't say anything during lunch--not when the remark flew out of my mouth and I knew it was insensitive. Not throughout that lunch when I kept looking carefully at "J" and "L" for their reactions. Not when I immediately got home (because I forgot about it). It was only later that night, when the pin prickles of guilt nagged at me that I opened up my laptop and sent that email message to "J". I say this because it would have been easier for me to let it go--but it would also have bothered me, even if it didn't bother "J" or "L" (who I talked to after I got "J"'s email and who also said she didn't register the remark).

It's not easy to admit when you are wrong. It's even harder to acknowledge when we say things that are offensive and that hurt others or that put us in a bad light. But it is important that we do own up to our shortcomings, esp. when it comes to the racially insensitive remark.

And for those of you unsure of why the expression "low on the totem pole" is offensive, we need to really understand the significance of totem poles to American Indian culture. The expression is blithe and off-handed and doesn't recognize the sacred nature of totem poles. They are majestic and regal and they represent the family and kinship networks of American Indians. They shouldn't be relegated to off-handed remarks made to signal low priorities (which, by the way, is an inaccuracy--totem poles are not necessarily arranged in hierachical order top to bottom). And I should know better, especially since I saw some very beautiful and breathtaking totem poles on a summer trip to British Columbia. 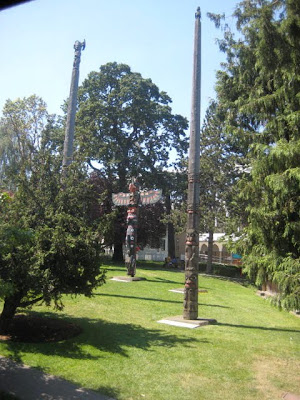 Email ThisBlogThis!Share to TwitterShare to FacebookShare to Pinterest
Labels: acknowledigng when you are wrong and moving onward, saying sorry when you make a racially insensitive remark, totem poles

don't sweat it. it was accident. just make sure that you don't say it again. when i say something incorrect i make a mental note to not say it again. no worries.

i am thrilled that you recognize that as a gaffe! how often have i heard people talking about having a meeting and referring to it as a "pow-wow". Being an American Indian, it's one of those things that makes me cringe and roll my eyes simultaneously. And most people who say it, actually don't get it. They don't actually see that as a racial gaffe...thanks again!!

This was a teachable moment for you and those of us who can read your blog.

We can't always be exceedingly critical of everything we are about to say, otherwise we might say very little. Foibles give us a chance to grow and experience our frailty. The shear act of seeking forgiveness and acquiring knowledge is a great gift to the offended and a blessing for us.

Hats off to you!

Thanks so much for stopping by and leaving a comment.

I know it was just an accident, as david says, but it really was terribly embarrassing for me, because I feel like I SHOULD know better and SHOULD do better.

I am also embarrassed that it took saying that expression in front of a Native person to get me to realize how racially offensive it is. I'll be completely honest and say that I had used that expression before, uncritically and unthinkingly, and then it took me being in front of an American Indian person while we're talking about racial issues to actually GET how offensive an expression that is, which also makes me cringe, in hindsight, that I didn't come to that realization earlier.

But as Mixed/Other notes, it's a teachable/educational moment, and I shouldn't beat myself up continually but instead should learn from this and move on. So I'm glad, Colby family, that I am paying more attention to these things because I think too many of us do take for granted the latent racism and racially offensive images/expressions related to indigenous people. Like that damn tomahawk chop or references to "Tonto."