Since I'm an English professor I thought that I should, from time to time, provide book reviews of works that fit with the topic of this blog, which just so happens to be a majority of what I read, both out of professional duty and personal interest.

So let me introduce you to Edward P. Jones's The Known World. 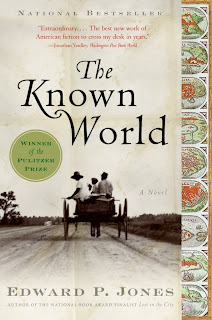 First of all, Edward P. Jones (and it's always Edward P. Jones--perhaps people don't want to confuse this author with the investment company) has been on my radar for quite some time. I remember hearing about The Known World winning the Pulitzer Prize in 2004 and remember reading a short story or two of his in The New Yorker. I must confess that on first glance, the topic of the novel was not one that I felt immediately drawn to--African American slave owners in the antebellum South. The skeptic in me felt that it had won the Pulitzer based on the novelty of the topic and, moreover, I worried about Jones's handling of this very sensitive issue.

Let me just say loud and clear: I was wrong. What I mean is, I was wrong to be such a skeptic or to worry about Jones's deftness with this provocative material. I was wrong to be so cynical about the motivations of the Pulitzer committee (although lets be honest--these committees are so politically motivated it's hard not to be skeptical). The novel is a wonder. The characters are drawn so vividly, in such unsparing detailed that also conveys a true understanding and sympathy for each character--almost none of whom are drawn as caricatures or in two-dimensional ways (almost none--there are a few, like the white patroller Travis, who are morally irredeemable and depicted as a simple evil...of course, then again there was definitely evil in the antebellum period so why not portray it in its simplest form?)

The novel largely follows the denizens of the Townsend plantation on the eve of its owner's death. Henry Townsend was a man born into slavery who was bought and freed by his parents when he was twelve, only to eventually earn enough money through bootmaking to purchase slaves of his own by the age of twenty, through the help of his former slave owner and current patron, William Robbins. By the time of his demise, Henry has amassed a large tract of land with around two dozen slaves and a wife, Caldonia, whose own free-black parents also own slaves.

The novel is told from an omniscient point-of-view and is set in the fictional Manchester County, Virginia. While the main action of the novel takes place over the course of about 6 months, the novel (which is really postmodern in its execution) flashes forward and backwards, from the time of Henry Townsend's youth on the Robbin's plantation to the present day. It may seem jarring, at first, the jumping out of sequence, but the effect is actually reassuring in a novel that has, as its opening premise, the violence of slavery and the curiosity of free blacks owning enslaved African Americans.

I think that's about all I'll say about the novel. I don't want to give away too much. I will say that it is a fascinating novel, not simply because of its subject matter -- black slave owners -- but because of the truths that this fictional novel tells about an actual historic condition, one in which we are still feeling the ramifications of to this very day. The novel's brutal honesty about class and caste differences, about the role of white supremacist thinking in the antebellum period, about the racial differences that became codified in this time period, and the tensions and uneasy alliances and hostilities always felt and often unexpressed between slaves and their owners, are themes and issues that resonate in our contemporary time period and may help to explain why the topic of race is so thorny and complex.

So if you are wondering about a good book to read, one that both tells a tale that will keep you turning pages as well as gives you much rich food for thought, especially in terms of thinking about the complexity of race, I highly recommend Jones's The Known World. I also recommend this Washington Post interview with the author and for further reading on African American slaveowners, click on this link.
Posted by Jennifer at 9:26 PM

Email ThisBlogThis!Share to TwitterShare to FacebookShare to Pinterest
Labels: a good novel to read to get you thinking about the complexity of race, Edward P Jones, The Known World