It's the last day of the first month of the new year (and new decade)--is that simple enough for you? It's also a frozen wonderland outside. Yesterday my town received 8 inches of snow. This was the scene near my home (I was out walking my dog--luckily I still had all my winter gear from living for 7 years in Massachusetts, including an amazing pair of boots that were tested in the Alaskan tundra and are rated at 20- below zero). 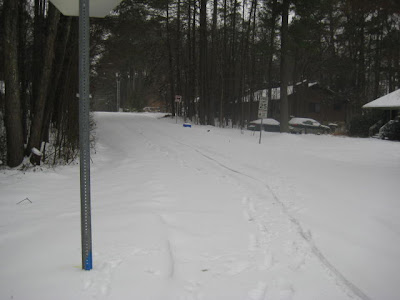 And this was the scene this morning, as seen from the porch of my home (that's my dog "B"): 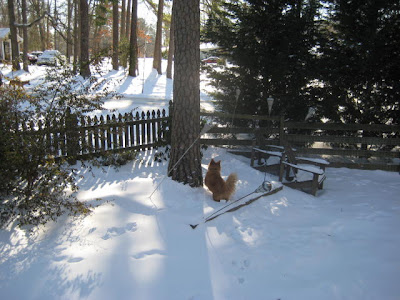 Now, for all of you living in areas where 8 inches is a fairly routine event in late January, I'm sure you are saying "OK, so what?" But for anyone who understands what snow means south of the Mason-Dixon line, you will understand that 8 inches in my hometown means that EVERYTHING shut down. Most weekend events were cancelled. The airport cancelled all flights in or out. A birthday dinner I was to attend was cancelled, both out of concern that some of us wouldn't be able to get in our cars and drive as well as out of concern that the restaurant may not even be open. Main roads got plowed but not very well--not like in New England--plowed means most of the snow is pushed to the side and a bit of salt is scattered, but it's not clean and from the way I saw certain cars skid, people here DO NOT KNOW HOW TO DRIVE IN THE SNOW/ICE. And, of course, no one has chains or snow tires, and even the 4-wheel drive cars are still finding it challenging.

All of which means, I've been homebound. Which is fine by me. I've been able to do a lot of reading and saw a indie movie by Wayne Wang, A Thousand Years of Good Prayers, based on a short story by Yiyun Li (be on the lookout for a future movie review). I'm also re-reading a collection of short stories by Robert Olen Butler, A Good Scent from a Strange Mountain (look for a future book review) in preparation for teaching it in a few weeks. So all in all, things are moving pretty slow around here. I don't have anything more illuminating to offer at this point. Although I do have a few links for you to look at that I'm going to title "Outrageous!" -- as in, topics/themes that other bloggers have written about that any reader of this blog will find to be absolutely ridiculous/awful/outrageous:

*The Chris Matthews kerfuffle of "I-forgot-he-was-black" with respect to President Obama. Both What Tami Said and Stuff White People Do have their own insightful takes on this matter.

*WWII racism courtesy of the U.S. military "How to spot a Jap" -- lets hope there's not a 2010 edition of "How to spot a terrorist" (although what am I saying? Of COURSE there's a 2010 edition--just maybe not in such a handy-dandy pamphlet form) -- hat tip to Angry Asian Man.

*Justice Alito mouthing "Not true" at the State of the Union address by President Obama--thing is, as Huffington Post blogger Doug Kendall details, it IS TRUE.

*Finally, the latest installment of This Week in Blackness -- watch for yourself, but as usual, Elon is on fire!

Email ThisBlogThis!Share to TwitterShare to FacebookShare to Pinterest
Labels: having a lazy weekend with lots of reading, Snow in the South, Sunday link roundup

i like your pictures. they remind me of lake tahoe in winter.

I thought of you when they showed students at your Southern U. on TV having snow ball fights. It's cold in Austin right now, but not that cold. Enjoy. Also heard about the anniversary of the Greensboro 4 this morning on NPR.

Sorry it took me so long in responding--had to shovel out the driveway with a broom (JK!)

It was beautiful while it lasted! Southern man and I thought about building a snow man--and Southern dog had a fun time frolicking in the yard. But at the end of the day we were just too cozy inside. As pretty as it is, I really don't missing living in it.