On Friday, July 17, 2009, Walter Cronkite died in his NY home at the age of 92. I can't remember a time when I wasn't aware of Walter Cronkite--he always seemed to be on t.v. And while I wasn't even born when he covered the news of the 1960s (his half hour interview with JFK, breaking the news of JFK's death, announcing the death of Martin Luther King Jr., being on-air when Neil Armstrong took his first steps on the moon--I always knew he was an important voice in news broadcasting. 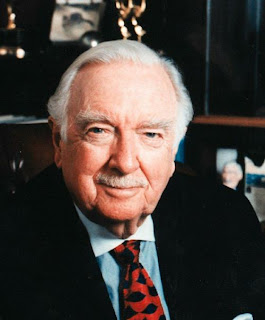 And oddly enough, perhaps I first gained respect for Walter Cronkite not through watching his broadcasts but in reading a children's book when I was around eight or nine, Lizard Music by Daniel Manus Pinkwater, because in this book the hero/protagonist is a huge Walter Cronkite fan. And rather than thinking that was odd, it made me also want to watch Walter Cronkite cover the news (which probably says a lot about how geeky I was/am and my budding love of politics).

Anyway, in honor of Walter Cronkite's life--particularly his esteemed title as "the most trusted man in America" I leave you with this article from The New York Times and a video piece (click here for the link--I wasn't able to embed it successfully into this post) that discusses his coverage of the JFK assassination and the very human emotions he showed when finally announcing the death of JFK. In particular, at the end of the piece below, Cronkite, tearing up again at the memory of JFK Jr. saluting the coffin of his father, says that anchor's aren't supposed to cry. Maybe so, but I think everyone is glad that he did.
Posted by Jennifer at 1:08 PM

Email ThisBlogThis!Share to TwitterShare to FacebookShare to Pinterest
Labels: July 17 at the age of 92, Walter Cronkite died on Friday