On Monday I'll be leaving for a retreat that will be held at The Greenbrier resort in West Virginia (long story about the kind of retreat it is and why I'm going and why it's being held at a AAA Five-diamond resort--can't get into details but lets say, I'm not the one footing the bill by a LONG shot.) 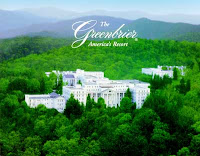 I have to say that I have some mixed feelings about this trip. First of all, the last time I was in West Virginia I felt distinctly unwelcome by the hostile stares and curt responses Southern Man and I received everywhere we went. Although Greenbrier will be distinctly different from the Hampton Inn we stayed at outside of Charleston. For those of you thinking that "Greenbrier" and "West Virginia" are ringing a bell in your mind, if you are a golfer you will know that it has a world class champion golf course (the Ryder Cup has been held here) and Sam Snead was the golf pro at the resort back in the day. But its real notoriety came when it was revealed in The Washington Post in 1992 that a secret bunker underneath the hotel had been built to house the members of Congress in the event of a nuclear catastrophe (it is decomissioned and apparently you can take a tour).

But what really makes me pause is the clear class discrepancy between those who can afford to stay at The Greenbrier and the town of White Sulphur Springs. I did a google search and found this site that breaks down things like median income, race, professions, housing prices, crime stats, and other demographics in this town. Essentially, the town exists to service the resort--most people are employed in service related positions, 74% have a high school education, 9% have a college degree, and 6% a graduate or professional degree (according to the U.S. census, the national average of Americans who graduate with a high school degree is 80%, 15.5% have a college degree, and 9% have a graduate or professional degree). The median income is $28,300 (the national average according to the U.S. census as of 2004 for men was $40,798). 81% of the town is white, 15% is black, 1% Hispanic, 1% American Indian, and 2% are two more more races. They don't even LIST Asian/Asian American.

This is clearly a town of have and have-nots, with the have nots being mostly the people who work at The Greenbrier and the haves being people who show up for a few days (or weeks if they can afford that much leisure--both in terms of time and money since it's $20/hour to play tennis and $25/hour to play crouquet--can you BELIEVE they charge you to play croquet???!!!)

I'm assuming there will be wifi there, but who knows if they are going to charge $20/hour for its use, so I may not be blogging or moderating comments until I return later in the week.

So here's to an early happy father's day to all the Dad's out there (literal as well as figurative) and I'll be sure to report back on what it was like to be in THIS version of West Virginia when I get back.
Posted by Jennifer at 7:05 PM

Email ThisBlogThis!Share to TwitterShare to FacebookShare to Pinterest
Labels: class disparities, feeling out of place before I even get there, The Greenbrier, West Virginia