Mixed Race America owes an apology to Michelle Obama. There have been plenty of posts about her husband, about his campaign, even about his family of origin (his sister, Maya, and his mother, Stanley Ann). But until now, there hasn't really been a post devoted to Michelle Obama herself. And that's a shame, because Michelle Obama is an AMAZING person, someone I've been reading about with interest ever since the campaign began. 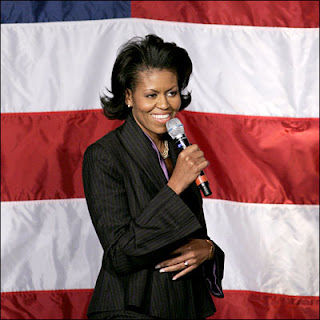 So let me introduce you to Michelle Obama, a woman you probably have been reading about in various forums, on and off line, for over a year. And let me tell you, briefly, about the Michelle Obama I've gotten to know through reading about her and seeing her in various media outlets (and in my own reading-viewing between-the-lines about her):

*She is intelligent, strong, and savvy, and something people don't note directly but that comes across in her quoted comments: she is interesting and funny!

*She is politically adept at handling the overwhelming criticism and not-so-veiled attacks on her by various politicos and media outlets. She is not a shrinking violet or a naive rookie to politics. I know she hasn't faced the level of scrutiny that she is currently bombarded with, but considering the scrutiny and the racism and sexism, she's doing really well (I mean, c'mon--we've been talking about racism vs. sexism in the Democratic primaries, but how many talking heads have noted that it's MICHELLE OBAMA who is at the intersection of BOTH sexism and racism in this presidential season (and don't even get me started about how frustrating it is that everyone wants to pull the two apart--as if you can talk about racism without talking about sexism--the two are so intertwined--but trying to talk about this twinning is so difficult because these issues are complex (sigh).)

*She is real. Michelle Obama doesn't put off that fake vibe or tense vibe of other first lady candidates. Although everyone has been comparing her to Jackie O, the former first lady that leaps to mind when I think about her is Roslyn Carter. Because I think Roslyn always came across as very real. Of course we can also look to former first ladies like Eleanor Roosevelt (supported her husband but also was a strong woman who reached out to people) and Hilary Clinton (smart, strong career woman who caught a lot of flack from people for being a strong, smart woman with her own career) for points of comparison.

*This last point is really irrelevant, but I thought I'd toss it out for what it's worth: I think Michelle Obama is a very attractive woman--she's just so striking! And although I do find it annoying that news articles spend a lot of time detailing the dress of women in politics, whether it's the politicians themselves like Hilary Clinton, or their partners like Cindy McCain, the truth is, Michelle Obama does have a certain flair and style that makes her stand out--she just looks like a confident, beautiful woman--this is probably why people compare her to Jackie O. The thought of her in the White House is really staggering--I am giddy just thinking about it.

There's so much more I could say about Michelle Obama, but I'm going to end by listing some links for you to check out from others who have written about Obama.

*A recent New York Times profile on her that talks about re-tooling her image for the upcoming presidential show-down--it lists some of the attacks on her, as well as provides a PDF version of her senior thesis from Princeton on race relations--and by the way, I don't get why people are making a big deal of her thesis--goes to show that we really ARE uncomfortable talking about racial differences/racism/prejudice.

*A New Yorker magazine article about her from March 2008 that is fairly detailed.

*A recent blog commentary from Sandra Kobrin on eWomen News about the attacks on Michelle Obama and the website devoted to exposing the sexism and racism being thrown at her (called Michelle Obama Watch).
[Thanks to my former student "A" from MHC for giving me this link]

*A very thoughtful commentary about Michelle Obama and the racism and sexism surrounding the discourse around her by Tami at What Tami Said. For you regular readers, you known how much respect and love I have for Tami and her blog--if you do a google search for "Michelle Obama" you will find other posts that she has written about her, but this one is one of the best.

Finally, if you want to see how Michelle Obama fares in one of the most mainstream media outlets around, you can see her on "The View." Her stint on the show demonstrates how versatile and media savvy she is--and she is able to hold her own in this format, which is no small feat!

[June 25, 2008--Addition: The Huffington Post has created a page specifically for Michelle Obama, so if you want to get your latest news on her, click here]
Posted by Jennifer at 9:36 AM