You would think that in a blog dedicated to issues of race in the U.S. and my own focus on Asian American issues I would have written an extensive post on the "Model Minority Myth" (lets just abbreviate to MMM for the duration of this post) and yet, after a quick search, I saw that I've alluded to MMM in several posts and assumed everyone knew what I was talking about. But I've never elaborated.

And I think the time is right for a post debunking the MMM because a report just released that was conducted by/sponsored by NYU, The College Board, and various Asian American educators has just been released and it takes on the MMM--stating, very clearly, the stereotypes that are perpetuated by the MMM.

For example, the stereotype that Asian Americans excel over all other groups (including whites) because of genetic superiority in terms of intelligence or cultural superiority in terms of work ethos. Or that Asian Americans are a bunch of nerds who study the hard sciences and math. Or that Asian Americans are taking over all sectors of education and crushing everyone like Godzilla crushed Tokyo. But the MMM is also particularly dangerous when used as a tool of divisiveness. As in, people point to Asian Americans and say "See?! We don't have a race issue in this country. Look at all the hard working Asian people--why can't those other minorities be just like them???" In fact, it's no coincidence that the phrase "Model Minority" was coined in the mid-1960s -- first in one news piece to praise hard-working Japanese Americans and then a year or two later, in another news essay praising hard-working Chinese Americans and their ability to assimilate and capture "The American Dream." 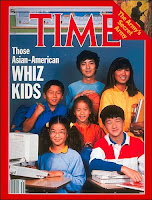 The New York Times has a piece about the report (click here) and one of the things it notes is that this stereotype is NOT true. First of all, the report notes that "Asian American" is a broad phrase and captures a host of various ethnic groups that span a vast region that is extremely diverse. And if you look at rates of graduation and educational achievement for SouthEast Asian Americans (especially Hmong, Cambodian, and Vietnamese) they suffer low educational achievement, high drop out rates, rates of incarceration, and poverty levels.

Also, it's REALLY important to remember that the MMM is a stereotype that has been linked to Asian Americans and like with many stereotypes, there is a cyclical and self-perpetuating nature to them. Asian Americans see that they are supposed to excel and so they do. This is simplistic, but it's part of what Stanford researcher Claude Steele has called "the stereotype threat." (btw, Claude's more conservative cousin is Shelby Steele, but you should NOT get the two confused--Shelby believes it's rational to cross the street when you see a black man because society has programmed you to link African Americans with crime in your head. Claude does NOT take this pov, and has done groundbreaking research at Stanford to show the ways we are being programmed and that we can FIGHT this programming and the stereotype threat we perceive--that everyone is subject to--and that the way to have a more integrated and mixed-race society is to recognize that these ARE stereotypes and not inherent qualities associated with particular ethnicities or racial groups). See Steele's article in the Atlantic Monthly "Thin Ice: Stereotype Threat and Black College Students" and a brief interview with him at Mount Holyoke College (click here).

The Model Minority Myth is just that--a myth. It is NOT true that Asian Americans are smarter than any other racial/ethnic group. It is NOT true that Asian Americans are succeeding more than other ethnic/racial groups--especially other ethnic/racial minorities. The myth and stereotype does disservice to Asian Americans who are not high achieving and who are struggling with poverty and racism. It does a disservice to other ethnic and racial minorities who are told, "Why can't you be more like those Asians" and it's simply BS to think that there are some cultures who value education more than others. What society or culture in this world is going to say, "Nope, we don't place a premium on learning...we don't care if our young people become educated."

If the MMM was really true, then how come Asian Americans aren't ruling the world, I mean SERIOUSLY! If Asian Americans are so smart, how come we aren't dominating the banking world? Winning the Nobel Prize in various scientific fields on an annual basis? How come we don't hold most of the patents in most of the technological advances? How come we don't comprise half of the Fortune 500 company CEOs? Or have major representation in Congress? Or just in the field of education--why is it that in the one field we are supposed to absolutely DOMINATE--higher education--there are only 33 APA presidents of any colleges or universities in the nation--that's less than 1% nationwide. Clearly, we aren't such a model minority after all.

To read the full report, go to the College Board's website here. And for another piece (a bit dated but still relevant) that takes on the MMM click here.
Posted by Jennifer at 11:33 AM

Another threat of the "MMM" is keeping Asian-Americans separate from "other" races in terms of fighting for rights. Believing the "MMM" makes it common for other POC to think that Asians "don't count" as people of color. That racism doesn't affect us, that we "have it good," etc. And it's exactly that super-"Other" status that keeps Asian-American Advocacy groups so unheard-of.

Great point CVT--I do think the MMM does, potentially, divide Asian Americans from other racial minorities. I remember once talking to an African American college student while I was in graduate school. And I made a comment about racism, but also said that I didn't know what it was like to be black and therefore my experiences would be different from hers. And she paused and looked at me and said, "Do you think that racism is experienced differently if you are Asian American than if you are black?" And I said, "Absolutely!" and then what followed was a really interesting conversation about how she thought that Asian Americans didn't really suffer from racism or that they thought that their experiences were the same as African Americans and how that really bothered her and that I was the first Asian American person to really talk to her openly about race.

And I think that happens a lot. We don't talk about race/racism with one another across multiple boundaries--and we don't take on each others' causes enough. I do think that within certain Asian American communities/groups there is some racism/prejudice against other groups that can be divisive and problematic (one need only look to the post-LA-Rodney King moment to see what I'm talking about with the triangulation of African Americans-Korean-Americans-and-white Los Angelenos--and we can make it into a square by adding Latinos/Chicanos).

But I'm hopeful--maybe because I'm inherently a naive optimist as much as I'm a jaded cynic--I do think that there are advocacy groups who are trying to make stands not only within their own community but across racial divides--there are certainly blogs like Racialicious and Angry Asian Man who have a clear anti-racist agenda.