This post is for you golfing fans--although non-golfers may also be interested to be introduced to the current #1 ranked female player in the world: Lorena Ochoa. 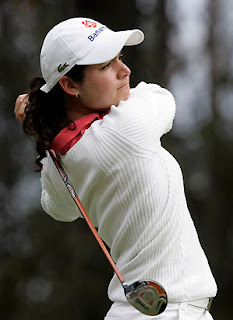 [I chose this photo so that you could see the torque of her body when she swings a club--her belt buckle and hence her torso is facing forward in the direction that her ball just flew but notice the way her club and arms are twisted around her body--that's great form!]

I think that the golf media has often overlooked Ochoa in the past--perhaps because she doesn't have the typical (or stereotypical) all-American girl looks of Morgan Pressel, Paula Creamer, or Cristie Kerr. But Ochoa's dominance within the LPGA can't be ignored and certainly with Annika Sorenstam's impending retirement, the tour needs a new force to galvanize galleries and inspire people not only to follow the LPGA but to take up the sport of golf. In particular, the LPGA could use a rolemodel to inspire young girls and women to start hitting the links.

Lorena Ochoa could be that rolemodel. Read this latest profile of her in The New York Times. And be sure to check out her official LPGA page, which also lists her official website and the charity that she founded in Mexico. By all accounts Ochoa is not only a gifted golfer, she is a really generous person, caring and compassionate and kind.

She is also a great reminder that "America" includes countries like Canada and Ochoa's home country of Mexico--and certainly Mexico's ethnic history is about as mixed as you can get. So Mixed Race America gives a shout out to the #1 ranked female golfer, Lorena Ochoa. Be sure to catch her at the US Open next weekend--she's certainly a golfer to watch.

[By the way, this whole post is dedicated to my friend "S" on the West Coast, who has been bugging me about including other golfers than Tiger on this blog and showing some love to Latinos by including Ochoa--so this one's to you my former golfing partner "S"--the biggest Fresno State bulldog fan I know]

[June 24, 2008 -- Link addition -- Tip of the hat to Dance for alerting me to this SI article on Ochoa--the more I read about her the more I think she is amazing both because of her golf prowess but more because she seems like a really wonderful person, which seems to be a rarity in professional sports--someone who truly is "good" (in the moral sense)]
Posted by Jennifer at 4:33 PM

Thanks for showing love to Lorena Ochoa. She's the heir apparent to Annika.

Sports Illustrated just did a substantial story, too. 9 June issue---I'd link it but their site makes my head hurt. It talked a little bit about how the LPGA wants to use her to up the overall visibility.

Thanks Derek & Dance for your comments--and I did link to the SI article and agree that the SI site does give one a headache!

Yo, "S" here. Kudos for mentioning a golfer who is not Tiger or the Wie. They are great players, but it's interesting how little love Ochoa has gotten compared to all of the Wie hype of the past couple of years. It could be because Wie is "more marketable"--read "pretty" in the eyes of golf followers. But I also suspect it has more than a little to do with Ochoa being Mexican--at a time when immigration from Mexico is the favorite punching back of the right. Heaven forbid we have a positive Mexican figure making a name for herself North of the Border. I wonder what Lou Dobbs would say. And Ochoa hangs with the golf course maintenance workers from Mexico? I thought only my father did that...

Hi "S"--glad you stopped by and saw that I can, indeed, appreciate Ms. Ochoa (or Senorita Ochoa en espanol). I'm sorry she didn't fare better at the U.S. Open but she's not going anywhere and I'm sure we haven't heard the last from her.

As for the bulldogs, happy for you but you know I'm not a big sports fan, especially when it comes to anything outside the realm of golf. Except for the Olympics that is--I'm looking forward to seeing them in August.

But just for you, GO FRESNO STATE--there, are you happy???