Oh the pleasures of TV addiction...

I'm watching Top Chef Chicago, and I LOVE it. It is my current favorite TV addiction. And the episode which originally aired about 2 weeks ago had the special guest judge, Ming Tsai. Ming Tsai, voted People Magazine's sexiest man once upon a time (which, for those of you who know the politics of race and gender KNOW that's a big deal to have an Asian American man listed as "sexy"). 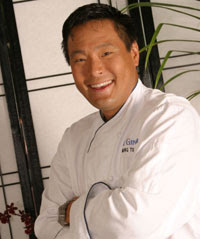 But more importantly, Ming Tsai's restaurant, Blue Ginger, is fantastic! Four years ago I had the pleasure of giving a talk at Wellesley, and my hosts took me out to dinner there and it was hands down the best meal of my life--everything lined up: wonderful atmosphere, great dinner companions, scintillating conversation, and a meal, start to finish, that made my mouth sing with rapture and joy! I can still smell and taste the main dish--a Cantonese inspired lobster dish that was HEAVENLY (I salivate just remembering it!)

The challenge for the contestants was to divide into teams of 3 and create a dish inspired by the element they had been given. For the "Fire" team, the sole Asian American contestant, Dale (a version of last season's winner, Hung, you could say, because they are shaping Dale up into being sort've the ass**** of this season, although he doesn't seem to be quite as diva-ish as Hung) announced to his teamates (two white women, Lisa & Stephanie) that he really didn't want to do "Asian"--with Lisa insisting that because Ming Tsai was the guest judge (and because she also specializes in Asian-fusion), she really thought they NEEDED to do Asian food.

And I couldn't help but think about the racial implications (because this is what I do, right?) which is to say, it seemed to make sense that Dale, who does cook with Asian flavors, wouldn't necessarily want to do Asian-inspired food for the Asian guest judge. Because who wants to be pigeon-holed and who wants to pigeon-hole someone else?

But really, I'm blogging about all of this because I'm currently watching Top Chef and this gives me an opportunity to tell all of you that based on the fallout from this challenge in particular, I've come to DESPISE Spike and to be TOTALLY annoyed by Lisa and to really feel for Jennifer (whose partner, Zoi, was eliminated on this challenge).

Among the reasons for me despising Spike is his VERY dismissive comments about Zoi and Jennifer as the "lesbians" of the show. Way to be reductive Spike! See you later buddy--misogyny and homophobia are SO last year's deconstructed salad (WTF IS a deconstructed salad anyway??? And STOP with the creme brulee infused with lavender, espresso, and worst of all BAY LEAF--I actually tried it in a restaurant--not good).

Anyway, if I had to put money on the show, it'd all be riding on Stephanie. She's low key, seems respectful, and more importantly, has been whipping up some amazing looking dishes.
Posted by Jennifer at 8:56 PM

Funny. I spent four years of my life in that town and I never went to Blue Ginger. I'll actually keep this in mind for my next visit to the Boston area, considering most of my friends still live nearby.

And now, I'm hungry. Thanks!

Hi Jason,
Yes, if you have a chance to eat at Blue Ginger (and more importantly, if you are with someone who is willing to pick up the tab, because to do this right and to order multiple courses is to rack up a big bill), I wouldn't hesitate to recommend it. I think a lot of "fine dining" becomes over-priced and you pay for the experience as much as the ingredients or technique of the chef, but I really did gain SO MUCH PLEASURE from eating there.