Today marks the 40th anniversary of Dr. Martin Luther King Jr's assassination. The Root has a great series of articles reflecting back on the state of race relations, poverty, African Americans, and continuing a theme of this blog and Senator Obama, the need to continue talking and tackling race issues, "Dr. King's Challenge: We're not all guilty but we're all responsible." 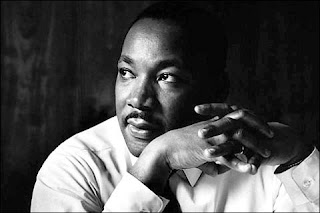 Many people have wondered, "What would Dr. King make of the current state of America? What would he think about the fact that for the first time we have a viable African American candidate running for the President of the United States? What would he make of the racial divide, the economic divide, the ideological divide that, at times, seems to be widening in America?"

I don't know what Dr. King would say, but if you want to read some eloquent and powerful words from an African American perspective on the state of race in the U.S., let me direct you to the blog What Tami Said and her post "Dear America: A few things this black woman would like you to know about race."

Here is a small sampling of Tami's provocative and forceful observations on race:

Why is the very mention of our country's racist past and its lingering prejudices anathema to some? Why does discussing racism so often result in defensive bravado? It's as if pointing out racial challenges negates the progress the country has made and condemns every member of the mainstream as an irredeemable racist. That is not the case.

If you are willing to listen, here are some other things that this black woman would like the mainstream to know about racism and the relationship between black and white Americans:

Racism and prejudice aren't about white sheets and Jim Crow anymore. Black Americans know that. Only an idiot would claim that our nation has not made tremendous gains in racial equality.It is just that we know that racism and prejudice still exist, because we live with it every day. Unlike the naked racism faced by our grandparents and ancestors, the bias most of us face today is covert or institutionalized.

In honor of Dr. Martin Luther King Jr., please head over to What Tami Said and read not only this remarkable post (when I read it I literally was sitting up in my chair nodding vigorously and saying "Yes! Yes! Yes!") but also take the time to read through Tami's other posts. I've had the pleasure of getting to know her as a fellow blogger who writes about race in America. Although we've never met, I feel like I've found a real kindred spirit and am so glad that her voice, speaking her truth, is out in the world for all to hear.
Posted by Jennifer at 11:13 AM

Thanks for your kind words about my post here and on my blog. (Cyber)meeting folks like you has been the most rewarding part of blogging for me.