Today is the first day of the lunar new year--the year of the Earth Ox. 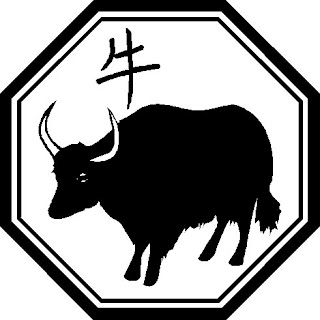 What is an earth ox, you ask? Well, there are twelve animals and five elements according to the Chinese zodiac. It just so happens that the year 2009 is the year 4707 according to the Chinese calendar. And although I know that many other ethnic groups and countries celebrate the lunar new year, it's hard for me to break the habit of referring to this as Chinese New Year, since that's the way I grew up with the holiday.

And part of what you need to do, to ensure good luck in the upcoming year, is to follow certain traditions: paying off all debts (hard to do in our credit economy--after all, it's not like I can pay off my mortgage), decorating the home with spring flowers and emblems of prosperity like oranges and kumquats (because both these fruits are round and orange, symbolizing gold coins), and most importantly cleaning your home.

So last night, after I finished doing all the things necessary as an assistant professor teaching two classes and sitting on three different committees and mentoring a few graduate students and overseeing an undergraduate thesis and trying to make an article deadline (can you tell I've been a bit busy this month?) I attempted to clean my house, starting at 8pm last night. Which was basically a symbolic attempt because did I mention that plumbers came and re-did our entire piping in the house and that the guys repairing the drywall (they cut into about a dozen places in the house) left a layer of drywall dust that has coated every surface in the house, and as much as we've been trying to clean in the last week, the chaos of modern life means that things have been piling up, and lets just say, my housekeeping skills leave much to be desired right now.

But none-the-less, I cleaned. I swept; I dusted; I washed; I scrubbed; I cleared clutter; I re-organized. I tried my best. And I feel good at the attempt. Because I think it's important to start the year with a clean beginning.

I should also add that President Barack Obama was born in the year of the metal ox. So Obama will be celebrating his 4th lunar birthday this year on August 4.

Chinese astrologists have already been predicting that this will be a tough year for us; the year of the earth ox has an emphasis on the earth, the land, which makes everyone think of real estate (and we all know how THAT'S going right now). Ox are marked by prosperity and fortitude; they are patient, tireless, hardworking, and powerful. These are certainly characteristics that seem to mark President Obama. And despite the predictions of the astrologists, I have HOPE that this year will be marked by good fortune. So on that note...

So it's safe to assume that intrinstically, my folks were thinking of the Chinese New Year when cleaning the abode this week.

While it appears that Obama is cleaning house of the Bush years, there are some spots that we can't just spray the proverbial Febreeze over. I know that much has been made of the first six days (just SIX), but I hope that he has the best cleaning service our tax dollars can buy.

Hey Jason, good to hear from you! And yes, I think somehow your parents were sensing that it would be a good thing to clean their home...that they were sensing the vibes of those billions of Chinese around the world who were trying to tidy up their homes.

And if only we had some kind of heavy-duty all-purpose cleaner to get rid of the nasty smells (and policies) we've had to endure over the last 8 years (sigh).

Hey, if you get a chance to read through my most recent and long blog post, I'd love to have you weigh in with your expert sports knowledge.