Politics & the Beijing Olympics--what say you?

A frequent commenter and fellow blogger, Jason Clinksales, has a provocative post in his blog "A Sports Scribe" about athletes and politics, particularly about the role, if any, athletes should take in the upcoming Beijing Olympics given their record on human rights. For more, you should really go to Jason's post, "Apolitical" (click on title for link) and leave a comment--I know he'd like to have a conversation with folks about this, and it is an important question, one I've posed here before related to Tiger Woods and social justice issues.

Although I believe that athletes should have their sport as their primary objective and profession, the mix of politics and sports can be very powerful--particularly the symbolism of certain gestures.

I am of course referring to the 1968 Summer Olympics in Mexico when Tommie Smith and John Carlos (the gold and bronze medal winners of the 200m dash), American athletes--African American athletes to be more specific--took a stand against racism in the U.S. (and one can say around the world) and made the following gesture during the medal ceremony (see image below): 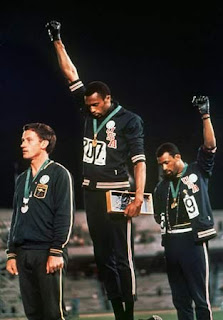 For more on this story, see the original October 17, 1968 BBC article (click here) and another article (click here) on the origins of Smith and Carlos protest, the fallout (both were banned from the Olympic athlete's village, thrown off the Olympic team, castigated by many, and received death threats when they returned to the U.S.), and the accolades they received 30 years later in 1998, when many finally recognized the courage they took in standing up for a cause they believed in. And many, at the time, also appreciated the powerful symbolism of these two men.

So I guess a question is: will we see a repeat in 2008 of any athletes taking a stand and making a statement in support of a social justice issue they are impassioned by? I guess we'll have to wait and see.
Posted by Jennifer at 7:53 PM

I support the right of any athlete to voice their opinion on an issue if they have one, but I don't expect them to do so just because they are an athlete. Chinese officials have to have a few reservations about this sort of thing taking place and I'm curious about any protocols that they may put in place as a contingency. I don't see much happening at the Olympics unless some Chinese citizens take the event as an opportunity to demonstrate. If that happens and the Chinese government responds with a heavy hand, it could get interesting.

I had a much longer response, but it seems that it did not go through on the site. Thank you, wireless, for going crazy on me.

Jennifer, thanks for the discussion.

Brian, despite my freelance profession, I agree with you 1000%, contrary to what many of my friends and colleagues will say.

The Olympics, for better or worse (and not the the committee's liking) has been a platform for a social and/or political statement, as Jennifer reminded us with the 1968 Olympics. The phenomenal stage it holds makes any statement that much more profound across the world. The organizers may dislike that the event becomes a political moment, but it is the lone event that the entire planet is focused on at once. Will the focus ever remain to the games? Not sure.

I have always been fascinated with the social role of sports, despite how reluctant many athletes are about it. My passions are the games themselves, but it is hard to deny that the expectations for athletes are extraordinary because of their profiles. Yet, I also find it somewhat unfair because (at least in my eyes and experience), musicans, actors and writers reflect the human condition in their jobs, yet do not face as much criticism and vitirol. Yet, at least in this country, it took Jack Johnson, Joe Louis and Jackie Robinson (and later Smith, Carlos, Muhammad Ali, Roberto Clemente et al.) for some folks in this country to stand up and take notice.

Brian, like you I do think that the athelete's primary if not sole responsibility is to their sport. But I do think that athletes are also human, and so like Tommie Smith and John Carlos, they take stands they really believe in, because as Jason outlined in his comments (and on his blog) the Olympics are a rare moment and forum to actually share these grievances to the world--to take a stand.

I think it was during the last Winter Olympics that a speed skater did something similar in terms of using his time with the press post-meet to talk about Darfur (or something similar) because he recognized that his 20 seconds of fame was fleeting and wanted the press to make note of something beyond the fact that he was the fastest skater at this point in time.

Anyway, Jason, I promise to leave a response on your blog and hope you also get more responses to this great post and question--and sorry that your initial comment never went through--technology is both boon and bane it seems!

Clausewitz,
Thank you for leaving a comment. I, unfortunately, do not speak Portuguese, but I believe you were complimenting my blog (thank you) and asking people to visit your own blog.

Hope you stop by again--and if anyone does speak Portuguese and wants to render an interpretation, I'd appreciate it!