I have just finished reading Covering: the Hidden Assault on Our Civil Rights by Kenji Yoshino. 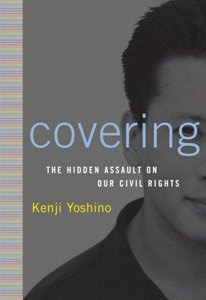 Yoshino is a law professor at Yale University and his book (published by Random House) is both a work of legal scholarship as well as a memoir about growing up gay and Japanese American, and his research on issues of civil rights as a Yale law school professor.

His basic argument is that all people cover, in the sense that we hide or mute parts of our identities, our personalities, from the general public--and that this covering demand, made most explicitly on certain groups of people like gay men, racial minorities, and pregnant women, is an assault on civil rights.

Using his own life as a text for interpretation, he traces the stages of his gay identity through three stages: conversion, passing, and covering. He sees covering as a form of assimilation--and tracing the legal precedents of Title VII, he also sees the ways in which the American legal system has sought to create legal jurisprudence that emphasizes a common American culture of conformity.

There are many more things to say about Yoshino's argument and the main message of his book--which is that it is imperative, in our day and age, to think about the covering demands we are placing on people and to understand them as limiting civil rights. As Yoshino writes:

"We must find a way to protect difference that does not balkanize the country into separate fiefdoms of competing identity groups. We need a new paradigm of civil rights."

What I appreciate about his book is the elegance of his prose--the way that he weaves his gender/sexual/racial identity into the larger legal narrative he is telling. And that he makes this all very accessible to a broad audience interested in issues of identity, of assimilation, and of course, of civil and human rights.

And if you want to actually see and hear Yoshino discuss these issues (and you have a good 30 minutes to spare), you can hear his lecture at UCLA law school on this clip.