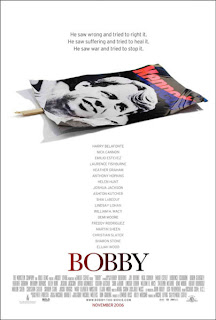 Last night I saw the film Bobby (2006), produced and directed by Emilio Estevez. It received mixed reviews by critics when it first came out, but I really liked it. I think one of the things I appreciated about it was the sense of anticipation--excitement--that RFK's candidacy held for people. People had a sense of hope--they needed that hope and that excitement: they needed leadership. One of the main themes throughout the film was how divided the U.S. had become, over the war in Viet Nam, over racism--Ceasar Chavez's strikes for the United Farm Workers, MLK Jr's assassination and the struggle for equal rights for African Americans (and all Americans), and just the sense of conflict and despair that seemed omnipresent--but which Bobby seemed to dispel, at least this is what the film and archival footage would have us believe.

A sense of hope and optimism--a belief that the country can do better and will do better under the leadership of a new president. The film reminds me that we are missing leadership in so many ways.
Posted by Jennifer at 2:02 PM