On November 27, 1940, Bruce Lee was born in San Francisco, CA. His parents, Hong Kong denizens and entertainers, were performing in the U.S. when Bruce was born. They all returned shortly to Hong Kong, where he was raised, until his late teens, when he was sent to Seattle to live with some relatives because of the "gang" activity he had become involved with in Hong Kong. The rest is, essentially, history. He studied at the University of Washington, where he met his wife, Linda, and began teaching his unique style of martial arts, jeet kune do. He relocated to Oakland, CA to open a martial arts school and then moved to Los Angeles to begin his Hollywood career. But racism and stereotypes kept him out of the series he co-created, Kung-Fu (which infamously starred David Carradine in yellowface) so he moved back to Hong Kong and began his international film career and became a martial arts action movie star, until his early tragic death on July 20, 1973.

Happy Birthday Bruce--you would have been 67 this year. May you rest in peace--may your legacy and legend live on. 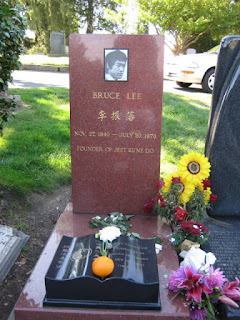 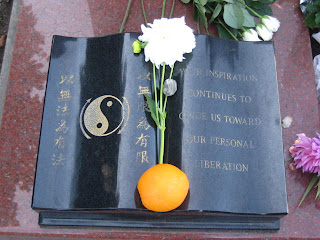 Do you know what the orange on the grave symbolizes? Or perhaps somebody just left it there by accident? Miss playing mah jong with you!!! Your aunt Sandra is keeping us on our toes though... ;)

Actually, I'm the one that left the orange. When my friends and I decided to find Bruce Lee's grave, we decided to stop at a store and buy gravesite tributes. The Chinese have a spring festival, Ching Ming, in which family members tend to the grave of their dearly departed and leave food offerings at the gravesite. So that's why I left the orange--a small food tribute to Bruce.

I also miss playing MJ with you guys! And I believe Aunt Sandra is cleaning up. I'm trying to find a group to play MJ down South--speaking of which, there is apparently a Southern version of Mah Jong which is TOTALLY WEIRD TO ME, but I suppose it's only because it's not the kind of mah jong I was raised on.

This Southern kind uses cards and holders and you pick a pattern and create the pattern??? There seems to be little strategy involved and games seem to last forever, although I haven't actually played a game myself--just observed. It was too weird to play--that's odd isn't it? That I was so troubled by what I considered the "inauthenticity" of the game that I couldn't bring myself to play a round. Or maybe it's just that playing mah jong resonates so much for me as a family thing, as a Chinese thing, that to see it in another incarnation was just cognitive dissonance for me.

Hello,
I came across this blog by chance, and I just would like to add a few comments. I am not expecting people to reply me, but that would be great.
I am myself of chinese origin, and I was born in Barcelona. So I would identify myself as spanish to a certain degree, but because I have been living a life surrounded by nasty people, my identity is somehow blurred. Since I was a kid I received all sorts of negative slurs from ignorants and racists alike. I was beaten up because of the color of my skin and insulted directly or indirectly.
I have visited many countries around the world and currently living in Canada. I always hated Spain, and my hatred grew stronger to the point that I need psychiatric help. Even that would not cure my hatred, and then I had decided to move to Canada. Now, from my experience of life, anywhere I go in the world, there would always be people calling me chink and telling me to go back to China. I do not even feel myself Chinese at all.
And here is when Bruce Lee plays a massive role in my life, his quotes really keeps me strong and healthy. For example: Do not pray for an easy life, pray for the strength to endure a difficult one.
Do you think of yourself as Chinese or American?
Do you know what I think of myself? Under the sky, under the heaven, there is but one big family.

Glad you found your way to this blog. There are some side posts to the right that you might be intersted in that talks about Asian American identity issues.

Being an Asian outside of an Asian nation is hard--esp. depending on where you grew up. Your experiences in Spain sound horrific--and jibe with what little I know about attitudes there with respect to Asian immigrants/Asian ethnic Spanish citizens.

I didn't have the same experiences growing up in the Bay Area of California where my parents had a lot of Chinese American friends and I had a sizable family network as well as the ability to go to two different Chinatowns in SF and Oakland.

I mention this not to say I had it better/easier, but that I think it's possible to find spaces where you can feel more comfortable being a hyphenated Chinese person.

As for my own identity, I am an Asian American woman of Chinese ethnicity and Jamaican cultural heritage--I claim all these, as well as a strong identification with U.S. American norms and values, even though I also critique those, as is my right as an American citizen who believes in the fundamental rights of free speech and dissent.

Thanks for stopping by--hope you leave another comment soon!

Your article was great but you forget to mention the fact that Bruce himself was one quarter German I believe and three quarters Chinese. Bruce's mother was herself the daughter of a German father and a Chinese mother who descended from a prominent Chinese family connected to historical royalty. I know that this is a small fact but it is still a fact worth mentioning in the article.