I went to bed in the South and woke up in New England. At least that was the feeling I had when I opened my blinds and saw my backyard blanketed in snow. My dog is currently frolicking in the front yard; he seems to enjoy the white fluffy stuff. And I just found out that Southern U., while canceling morning classes, will be business as usual by my afternoon teaching stint. 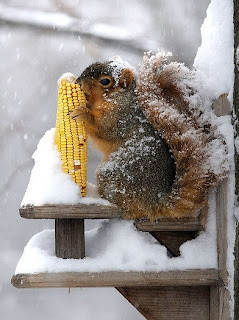 [This isn't a photo I snapped, but I've got a bunch of squirrels that my dog loves to bark at, so I thought this was a good photo to show how, some, like this squirrel and my dog, are enjoying the snow day]

There's a lot of things that have been swimming around in my head that I've thought about posting on: the phrase "underrepresented minority," the education gap, athletic departments in colleges during times of fiscal downturn (a topic I had promised to return to, and I will), as well as requests from folks around the blogosphere to make some announcements relevant to the topic of this blog, race and mixed-race in America.

But all of that will have to wait. Because even though I know I'll be teaching, it *feels* like a snowday. And I think I should put on some boots and go outside and try frolicking in the snow with my dog.
Posted by Jennifer at 9:26 AM

Email ThisBlogThis!Share to TwitterShare to FacebookShare to Pinterest
Labels: Snow days in the South feel even more magical than they do in New England