So I rented Rachel Getting Married this past week, an indie film directed by Jonathan Demme, written by Jenny Lumet, and starring Anne Hathaway (former Princess/Prada flimstar), who is not the titular character but her sister Kym, newly released from rehab and about to wreak havoc in the days leading up to her sister's wedding.

(click here for a link to the film's official website, where you can see a trailer and read more about the cast, crew, and awards this film has won).

This won't really be a "true" film review, more like a film musing/commentary. Because one of the things that became evident in the film, outside of the main plot/character development, were the friends and even family of the central characters (Kym, her sister Rachel, and their father Paul). First of all, Paul (played by Bill Irwin) is married to Carol (played by Anna Deveare Smith). This may not be remarkable if you don't know who Bill Irwin or Anna Deveare Smith are--but if you do know them, then you know that Irwin is white and Smith is black, which makes them our first inter-racial couple. But they aren't the last. Rachel is marrying Sidney--and Rachel is white and Sidney is black (and from Hawaii--there's that extra layer of culture/ethnicity/diversity/regionalism right there). Then there's Rachel and Sidney's friends--a vision of mixed-race Americans of various ethnicities, races, and cultures. 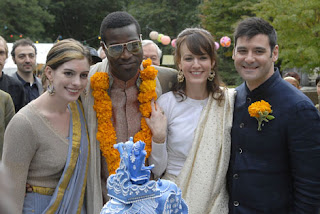 [A scene right before Rachel and her new husband are about to cut a cake that is in the form of a stylized Indian elephant--by the way, this was one element I definitely thought was odd because neither Rachel nor Sidney nor their families appear to be Hindi/Indian and this "theme" for their wedding is never explained--which raises another question about cultural appropriation, especially for weddings, but I'll save that for another post]

According to the DVD extras (on the "making of" segment) as well as this LA Times article featuring Jenny Lumet (daughter of white-Jewish director Sidney Lumet and maternal grand-daughter of Lena Horne), the polyglot of races, ethnicities, and cultures was no coincidence--the director/producer/writer wanted to show life as they knew it--which included having friends and family who were diverse in terms of race, sexuality, age, and a host of other factors. Of course, as my friend "B" pointed out, as much as both Lumet and one of the producers claimed that their friends were this "diverse"--the truth is, most Americans probably wouldn't boast a wedding party that was quite as diverse as the one featured in this film (which included an inexplicable "Indian" theme for the wedding, Brazilian carnival dancers, Eastern European stringed instruments, and a host of very artistic/arty folks just strumming and humming and singing and jamming their way through the film).

Anyway, from a strictly plot point-of-view, I do recommend this film. It was hard to watch, very hard to watch, at times, because there's so much raw pain in this film. On the other hand, it did feel "real" to me--and I have to admit that part of that feeling of reality did come from the very visibly diverse wedding crowd that were both in the background and foreground of events. The other thing I appreciated about this film is that there is no comment about the inter-racial aspect of either the father's re-marriage or his daughter's marriage to African Americans. It is simply a fact that doesn't need explanation or drama. Which is good, because this film has PLENTY of drama without adding racial conflict into the mix. And really, it's just nice to see pictures of mixed-race Americans that just are and that don't need additional film commentary (aside from what people like me are bringing that is).

[Update: 4/18/09: One of the commenters on this thread asked why I believe that the Indian-themed wedding is an example of cultural appropriation rather than an instance of irony. For my longer post about this issue, see my April 15, 2009 post]
Posted by Jennifer at 9:38 PM

Email ThisBlogThis!Share to TwitterShare to FacebookShare to Pinterest
Labels: a vision of mixed-race America on film that actually looks like a group of people I'd actually invite to my own wedding, Rachel Getting Married

I've picked up this film several times and put it back, for no particular reason. As someone who is always looking for that multiracial/interracial element in films and books, I'll now definitely follow through and actually watch it. Thanks for the insight.

Raw pain, yes, there was definitely raw pain in this movie. It was difficult to watch as certain dynamics in the family, I can relate to.
I'm curious to hear what you meant about "cultural appropriation". My friend whom I watched the movie with and I both noticed the irony of the mesh of cultures even with no representation from real people there (ex. indian-style wedding and no Indian people). I actually thought the wedding was really neat and symbolic of love knowing no boundaries!

Di,
Hi, thanks for leaving a comment. I think the topic of cultural appropriation is tricky. I mean, what do you do with someone who likes to wear a sari who is not Indian/South Asian? And furthermore, what do we do with a couple who appreciates Indian culture/cuisine who uses that as a motif in their wedding--is it simply an act of homage/appreciation of a type of aesthetics or does it become a kind of Orientalism and/or inappropriate appropriation of someone else's culture?

I think that this is worthy of a longer blog post/response, but what I will say that my own knee jerk reaction was that there was something I felt was disquieting about the whole motif being Indian/South Asian. The movie strongly emphasized the poly-racial/ethnic/cultural mix of friends and family. And if Indian was but one of the mixtures in the wedding motif, I probably wouldn't have blinked an eye. But because it seemed to be the "theme" of the wedding rather than one among a host of various cultural themes they were using, it seemed to be fetishized--sort've like having a Disney Cinderella theme for your kid's birthday party (or in a more disturbing anecdote, having a Beauty and the Beast theme for your wedding--a true factoid I know about from a childhood friend's wedding I wasn't invited to but heard about from my mother...I know this is totally snarky/judgmental, but I just find it WEIRD that you want to dress up like Belle from a Disney film for your wedding).

My wife and I watched the movie last night - we are Indian. We were intrigued by the whole Indian theme of the wedding which was really not explained. It was almost distracting for us to see so many Indian elements and yet no real explanation as to why? Cultural Appropriation - I really like the sound of that ... but in any case, the overly diverse background of the movie and people just strumming their instruments and jamming throughout the movie ... I did not care much for that. It seemed put on and too sophisticated to be real.

Apu,
I think that one of the things that the movie engages is in, is this kind of "hipster" multiculturalism--in other words, in order to be "cool" you have to have a multicultural/racial cast of friends and family and be "down" with how bohemian you all are. Of course when listening to the extra features, one of the things that came up is that the production team (including Jenny Lumet) wanted the film to reflect their actual lives, so that's partly what all the emphasis on art and multiculti stuff is about. But here's the thing: not everyone lives in NYC and has access to or knowledge of so many different forms of "culture"--which then makes this aspect of the film feel either odd or like part of a clique. At any rate, thanks for stopping by and leaving a comment.

Hi! I know this is a really old post, but I figured this would be a great place to ask. I have not seen the film, but I am wondering why the movie poster features two white people getting married (who aren't in Indian garb). Is this a reference to some earlier wedding/drama that causes some tensions between family members or a particular character? If not, do you suppose this was a ploy by the movie studio to avoid showing an interracial couple on their advertising? I'm very curious. Thank you for any insight!

I just googled the movie poster--and the couple in the background is actually the father of the bride and the bride--and she is wearing a sari. Hope that helps!

Ahh, okay. Thank you for the clarification, Jennifer! I could not tell the dress was a sari due to the blurring. Also, it is my understanding that traditional wedding saris are red.

Traditional wedding saris are red, but this wouldn't be a traditional Indian wedding since none of the bride or the groom's family were Indian!

Thanks for stopping by!

It was very frustrating to see all of those Indian elements used in such a careless way in this movie, as if merely for the sake of how "exotic" it makes everything look and feel. I mean, a bunch of Americans with no Indian background sitting around in saris and asking, "you want some saag paneer?" while being unable to even pronounce the names of the Indian dishes properly is cringeworthy to watch.

However, I do want to point something out in your post. "by the way, this was one element I definitely thought was odd because neither Rachel nor Sidney nor their families appear to be Hindi/Indian" Hindi? You mean Hindu. Now that's an equally frustrating, not to mention ignorant statement to make and I've heard it far too often. Hindi is merely a language.