I have a confession to make. I'm an addict and so is Southern Man.

And what we're addicted to is the ABC series, Lost. 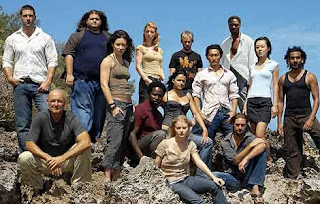 [I think this photo may be from Season 2, but I can't be certain]

It all started with Star Trek: The Next Generation. I discovered, months ago, that they were playing re-runs of the show on the SciFi network. So Monday nights Southern Man, and I, got into the habit of having that be our "TV" night.

[Aside: I'm a typical academic in some ways, which means that most evenings I'm actually reading/writing/returning email rather than watching tv, except if it's Bravo's Top Chef, my reality tv addiction]

Anyway, one week we turned on the tv and it's wasn't Star Trek: TNG, it was the pilot for the show Lost. I actually got up and went to my office to work, but Southern Man continued to watch it, and soon he was hooked. And then, when I came out of my office, I started to watch, intermittently, as I returned email. And then I became hooked.

Then we discovered something REALLY dangerous: ABC has made full episodes of Seasons 1-4 available FOR FREE.

We're on Season 3, episode 15. I won't say anything more because if you are an addict, then you probably know exactly where we're at in the series/mythology. And if you aren't an addict, you probably think, as I did, that this is some dumb show with these strange plot twists and you just think it's a waste of time.

But for the race researcher in me, I have to also admit that some of what pulls me in is the racial dynamics undergirding the show. Because I can't turn off that part of my brain.

I'll save more of my racial observations about the show for later, but one of the things I've been mulling over is the choice to make many of the non-white characters be from different countries. There is a Korean couple, an Iraqi, and a Nigerian. There are also an African American father-son duo, an African American-white inter-racial couple, and a Latino/Mexican American man. And I think in Season 4 they introduce an Asian American man (played by actor Ken Leung). The actors who play the Korean couple are, I believe, Asian Americans who are fluent in Korean but who speak accentless English. So I guess I wonder what this does to have the visibly Asian looking characters be Korean rather than Korean American.

From a plot/narrative point-of-view, I think this makes sense. And the truth is, there are plenty of other nationalities represented--Australians, Brits, Americans, a French woman, and we also meet a Russian and a Scotsman. However, my own bone to pick with Hollywood/mainstream media is in the almost default position that Asian Americans actors get slotted into as being Asian rather than Asian American.

But bone picking aside, boy is it a good series!
Posted by Jennifer at 1:24 PM

Damn, do I ever love Lost. I have pretty much given up on TV these days (used to watch Heroes, Scrubs, The Office...plus the wife and I are recovering Law & Order addicts), due to the current busy-ness of our lives. But I will have to make time for Lost when it comes back in February. :)

(a question you don't have to answer: do you find Sayid hot? Most of the women I know--my wife included--think he's a dreamboat, and I have to say, I find him pretty attractive myself...)

Hi Spartakos,
Yes, LOST is truly addictive--Southern Man and I just finished Season 3 and we made a promise to each other that we wouldn't watch any new episodes while we are apart. So I'll have to wait until the new year to catch up on Season 4--and I think we might be completely caught up by the time the season premiere hits!

I mention the above because I'm currently stuck at Newark airport--there is a delay on my flight to CA and I've got a good 4 hours to fill before my flight leaves, and there's free wifi here and, well, it's awfully tempting to think of going to the ABC site and watching more LOST...

But I'll restrain myself.

And to answer your last question, I DO think that Naveen Andrews (the actor who plays Sayid) is hot--and I think he's a good actor. I first became aware of him when he was in the film THE ENGLISH PATIENT (a film that stars Ralph Fiennes--a man who is so smoking that anyone, male/female, gay/straight would leave his/her partner for)--if you read the novel you realize what a critical role Kip plays in the novel and really, the role is wasted in the movie, both in terms of the character as well as the actor. Hope that Andrews gets more work in the future!

Naveen Andrews IS a great actor, I shouldn't have neglected to mention that...in general, I think he does the best performance aside from Terry O'Quinn (who's actually been slipping in later seasons), Michael Emerson (who plays Ben's role so damn well), and Daniel Dae Kim (who really impressed me with the personality he put into the role, even when he was mostly silent). I do hope Andrews gets more work, and I'll have to watch "The English Patient" now.

Kudos for mentioning Ralph Fiennes, who I mostly agree with you on, btw (though I wouldn't leave my wife for him, if I were single I might consider "switching teams"...) :) I've mostly seen him in very different roles ("In Bruges" and "Strange Days" were my favorites...and both have the bonus of excellent co-stars, Brendon Gleeson in the former and Angela Basset in the latter).