One of the pleasures of taking a time off from life (and I definitely feel like I am taking a time-out. I know for some people, a vacation means sight seeing and becoming edified and going places and doing things. My ideal vacation has always been about being still--about the ability to do nothing and to have no obligations other than to myself and the call of the ocean and sand, since my ideal vacations always take place near the sea), is that I get to do a lot of pleasure reading. Or even if it's reading that may intersect with my research interests, it's still a pleasure to read contemporary American fiction.

Which brings me to today's book review: Run by Ann Patchett. 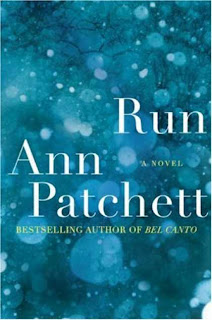 I must confess that this is the first Patchett novel I have read. She's most acclaimed for her fourth novel (the one that immediately precedes this one, Bel Canto). And certainly it is on my "to read" list--it has been for a while, but especially now that I've finished Run (which I read in a 24 hour time span--I could not put it down and Patchett's lyricism make the book a delight to read), I will be sure to check out Bel Canto.

But besides being an enjoyable piece of contemporary fiction, this novel is appropriate for Mixed Race America because at its heart is a family, the Doyle's who are comprised of the senior Doyle, former mayor of Boston, his biological son Sullivan, who shares the same read hair as his deceased mother, Bernadette, and then there are the two brothers that Doyle and Bernadette adopt, Tip and Teddy, named after those iconic Boston politicians, Tip O'Neill and Ted Kennedy. And, indeed, the novel (which is set in the South End neighborhood of Boston) is about politics. It is also about transracial adoption--about adoption in general--and about how we find kinship and connection with those we do not share blood with.

Although one of the New York Times book reviews quite rightly faults Patchett for not delving more deeply into the reasons behind the boys being put up for adoption, Patchett does not shy away from race in the way that another reviewer accuses her of doing. Instead, I think Patchett drops in self-conscious observations throughout that make clear that she knows what kinds of assumptions and tensions others may bring or believe in seeing an older white man who is the father of two university-aged sons (one goes to Harvard, the other to Northeastern). Yet it doesn't belabor that tension and actually shows the tension to be something outside the relationship among Doyle and his sons. This isn't to say that the boys, raised in a privileged white background, are oblivious to race and the intersections with class. In fact, at one point the elder adopted son, Tip, acknowledges very directly that part of his difference from other black Bostonians comes precisely from his privileged class and educational status. It is one thing to be a poor Black citizen in Boston; it is another to be a wealthy Black citizen connected to a former mayor of Boston.

Perhaps it is the mood I am in--that my analytical lens has been tuned down. But I really did find Patchett's novel luminous and just simply a good read. I'd love to hear someone else's take on it--perhaps my rose colored lens aren't allowing me to be more critical of this work. Or perhaps Patchett's novel really is a page turner that let me briefly transport myself back to Boston (and perhaps nostalgically I liked reading about my old stomping ground). Or perhaps it is this. That sometimes it's nice to read a novel in which race is both the central point of the novel and absolutely marginal at the same time. And that is perhaps what I find most refreshing about Run--not that Patchett isn't aware of race and racism but that it doesn't necessarily inform the entiriety of her work--that these two young men get to be both young African American men but also (and perhaps more importantly) a devout Catholic (Teddy), a budding scientist (Tip), and brothers who loved their adopted mother devoutly and who treat their father and older brother were respect and affection--whose lives are defined, but not solely, but the color of their skin and whose personalities make them into individual character rather than caricatures.
Posted by Jennifer at 4:52 PM

Most of my ideal vacations will take place near the ocean! Lake Michigan was a nice "substitute" tho! I sincerely hope you are enjoying your time-out. Somedays I wish someone would put me in a time-out....where I can't talk to anyone, and noone can talk to me, because my nose is stuck in a corner. :) I don't really know you, I mean, I am just one of your blog followers...but I would like you to know that I am sending you a hug. I can imagine that this is a trying time in your life. And I am glad you have a chance to get away. When we had a serious and life-changing event in our family...we went to a remote camping spot in Montana. Just to get away from EVERYTHING. It was highly therapeutic. Have a good evening.

I just read this novel as well, and largely agree with your take on it. I linked to your review in my own here:
http://writingforliberty.blogspot.com/

Thanks for a wonderful blog!