Have any of you ever seen the 1955 film Love Is a Many-Splendored Thing? It stars the late William Holden as a war correspondent covering the Korean War. He also happens to be married but estranged from his wife, who is in the U.S. It also stars the now late Jennifer Jones, who plays a "Eurasian" doctor, Han Suyin. I put "Eurasian" in quotation marks because no one uses that term anymore, although it was quite popular (and more politic) back in the days. Now, we'd just say she is mixed-race--the daughter of a Chinese/Cantonese man and a British-white woman. The film is actually based on the memoir of Dr. Han Suyin--I'm sure that the romance between her and William Holden's character is really played up for dramatic purposes, but I've never read the memoir. 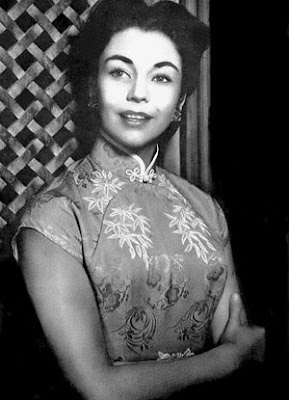 [A still from the film showing Jennifer Jones]

I begin with the film because Ms. Jones is my namesake. My mother LOVED (or maybe it should be the present tense LOVES) this film. And while "Jennifer" was the most popular name the year I was born (most folks either blame it on the film version of Camelot--Jennifer is a derivation from Guenivere or on the film Love Story--the tragic protagonist is named "Jenny"). And last week, on December 17, 2009 Jennifer Jones died of natural causes in her Malibu home at the age of 90.

I've always thought it was funny that I am named after a white actress who famously played the role of a mixed-race Asian woman. That a woman acting in yellowface essentially propelled my name into the world and that I ended up being someone who critiques yellowface and writes about issues of mixed race.

Anyway, rest in peace Jennifer Jones. I feel an odd sense of kinship and connection to you. And I must admit, I also have a certain fondness for this film...even though I wish they could have found someone who was actually Chinese or mixed-race Asian to play the lead.
Posted by Jennifer at 7:52 AM

thanks for passing on this information to us. I am saddened to hear the news about Jennifer and may she rest in peace and thoughts/prayers to her family.

Why would a Chinese actress be suitable to play a mixed character any more than a Caucasian actress is? That's a double standard and de facto racist.