You may accuse me of cheating a bit in my recommendation of this week's poet--or at least this week's poetic text. Because for those of you who haven't picked up Vikram Seth's The Golden Gate, let me just say: what are you waiting for? Go out to your local bookshop and pick up a copy NOW! 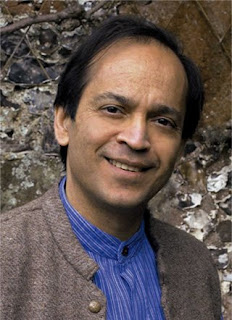 Vikram Seth was born in Calcutta, India. He is truly a Renaissance man, for he began his writing career at Stanford, not out of the English Department but in-between writing a PhD in Economics (I think he's still ABD). While working on his dissertation, he decided to apply for the very prestigious Wallace Stegner writing fellowship, got it, and then took some time out from his PhD work in Economics to write poetry -- and he published a book of verse out of that endeavor, Mappings. Then he became fluent in Chinese, lived a few years in China, and published a travel memoir, From Heaven's Lake, followed by another book of poetry, The Humble Adminstrator's Garden, and then The Golden Gate. He has gone on to publish half-a-dozen other books of fiction and poetry and memoir/biography, and he currently lives in San Francisco (although I think he splits his time between CA and India).

[NOTE: Pushkin, who is REVERED in Russia (something crazy like 90% of Russians have read Eugene Onegin), is also 1/8 African, which makes him one of the world's great mixed-race writers.]

The novel is set in the early 1980s and follows a cast of young, urban professionals (remember Yuppies?) in the SF Bay area, falling in and out of love, protesting nuclear war, trying to reconcile their queer sexual desire with their Catholicism, and, in general, being 20-something post-graduates. 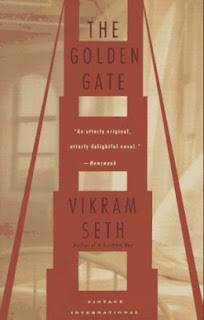 But what makes this novel truly unique is that it is composed entirely in Onegin stanzas. Let me show you through the opening stanza of the novel:

To make a start more swift than weighty A
Hail Muse. Dear Reader, once upon b
A time, say, circa 1980, A
There lived a man. His name was John. b
Successful in his field though only C
Twenty-six, respected, lonely, C
One evening as he walked across d
Golden Gate Park, the ill-judged toss d
Of a red frisbee almost brained him. E
He thought, “If I died, who’d be sad? f
Who’d weep? Who’d gloat? Who would be glad? f
Would anybody?” As it pained him, E
He turned from this dispiriting theme g
To ruminations less extreme. g

I know that a few of you may think, "UGH! A novel composed entirely of sonnets!" But really, after you start to get into the rhythm of the work, you become used to the formality of the verse, and there is something about the juxtaposition of such contemporary themes with such a traditional verse form that is simply wonderful.

Plus, there's the whimsy! Seth has a fondness for animals, especially cats. There is one named Charlemagne who develops a deep animosity for his owner's boyfriend. And there is an iguana named Arnold Schwarzenegger (and all this before he became the "Governator"). He actually rhymes "piranha" with "iguana," when describing how one of the characters, Ed, goes into a petshop originally intending to buy the flesh-eating fish only to walk out with the green reptile.

But this novel isn't just whimsical--it ruminates on the nature of love, on issues of social justice, on queer love, the duty to family, to God, to ourselves. Anyway, if you want to read something truly original, let me recommend that you try Vikram Seth's The Golden Gate. There is just something truly pleasurable about this book, and I believe it is due, in large part, to the brilliance and skill of his verse.
Posted by Jennifer at 8:39 AM