Growing up, I often heard the word "Oriental" used interchangeably with Asian or even Asian American. It wasn't until I went to college and took my first Asian American studies course during my freshman year that I learned about the history of this word--that it was used as a sign of Imperialism against people from Asian (and Middle-Eastern) countries in order to objectify them and render them as objects of study, colonization, and/or plunder.

If you look at a dictionary definition, like the Oxford English Dictionary (and what better place to start than the OED), the first two definitions of Oriental are:

1) Belonging to, or situated in, that part or region of the heavens in which the sun rises

2) Belonging to or situated in the east of a country or place, or of the earth; eastern.

But here's the thing: it matters where you are situated to figure out what is "east." If I'm standing on the Great Wall of China, then what is technically "east" is the continent of North America (if we're talking in terms of continents")--so isn't "Oriental" all a matter of perspective?

At any rate, I begin here with Oriental because I have been thinking about the question of appropriation--which I brought up when talking about the film Rachel Getting Married. And one astute commenter asked whether or not the use of an Indian motif in this film was a matter of irony versus cultural appropriation, which is what I had written very directly in my initial post in response to the image below: 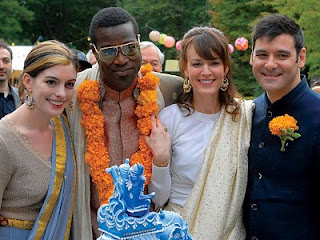 "A scene right before Rachel and her new husband are about to cut a cake that is in the form of a stylized Indian elephant--by the way, this was one element I definitely thought was odd because neither Rachel nor Sidney nor their families appear to be Hindi/Indian and this "theme" for their wedding is never explained--which raises another question about cultural appropriation, especially for weddings, but I'll save that for another post."

So why is this cultural appropriation? Or rather, why am I using the word "appropriation" versus noting that they had an Indian themed wedding?

Because in this case, I feel that appropriation--the act of taking something that doesn't quite belong to you--is the more accurate sense of what is happening, aesthetically, in this film for this fictitious wedding. Yes, it is perhaps part of the multicultural/bohemian/anything-goes-lets-throw-in-the-kitchen-sink-if-its-a-different-ethnicity "tone" of the film. But it also feels stylized in such a way that it made me feel like it wasn't simply another "additive" to their hodge-podge racial/ethnic/national mix of friends and family; the details of the saris and the elephant cake and the rehearsal dinner at an Indian restaurant was the dominant motif of the wedding. And yet, neither family revealed themselves to have any connection to India or Indian culture.

Indian isn't just what you have for dinner. And it's not a decorating choice for your living room. And unless you grew up with Indian culture or in an Indian home or in India, it seems like having an "Indian" wedding would mean you are taking part of someone else's culture for your own purposes--you are appropriating their culture--you are Orientalizing someone else's culture for the sake of being hip, cool, ironic.

But Indian culture isn't ironic--at least not for people who are in India or among the millions in the Indian diaspora. Indian culture is complex, multifaceted, segmented by region, religion, history, politics, sexuality, and a host of other things that can't be whittled down to a single cuisine or decorative choice. In terms of the overall feel of the film, the Indian-themed wedding seemed to be another "quirky" element, one signaling openness to multiculturalism, but only in a surface way--it's not as if they had a Hindi ceremony or chose any of the spiritual practices associated with various Indian sects (like Sikh, Buddhism, Jain, Islam or in Southern India, Catholicism).

Anyway, in my book, all this means is that it feels like cultural appropriation for the sake of achieving a certain tonal element in the film. And while I did like the movie, I found the "Indian" details to be unnecessary and a bit too precious and pretentious, especially due to the absence of actual Indian people/bodies in this film.
Posted by Jennifer at 5:44 PM

there is one part in which Rachel says I am Shiva the destroyer, your harbinger of doom this evening. also the working title was dancing with Shiva. so maybe there is a reading which gives meaning to the Indian theme, or perhaps something was lost along the way.

Thanks Some--I think that there was clearly meant to be some kind of explanation about the Indian theme--perhaps they met at a Hindu temple?

anyhew, it set off a thought experiment re: viewing Rachel as a racist recruiting tool in a world in which symbol/ritual is divorced from meaning:

Rachel Getting Married as Racist Recruiting Toolok, that's enough plugging of my blog ;) - the film got to me - i suppose i was expecting something better and was troubled by the affectation referred to above - ok that's it for now - thanks again for your post!

Jett Loe,
Thanks for your comment--I thought your own film analysis was thought provoking--although I tend to be a bit more naive/hopeful in thinking that people really wouldn't just see it as a racist recruiting tool (I know, you were being tongue in cheek, partially, I think). I do agree with something I think you implied--which is that this kind of multicultural flattening has a pernicious side to it, as it flattens out real issues of racism and white and class privilege, reducible to a multicultural hodge podge. Anyway, thanks for stopping by!

That was a great post. I just have one minor complaint: you should have used Hindu instead of Hindi in the sentences "neither family was Hindi/Indian" and "Hindi ceremony." Hindi is a language. Hindu is either a noun or adjective referring to the religion, not the language. Just a pet peeve I have.

Thanks for the clarification Solomon! And feel free to leave a comment anytime on this blog.