I was (and still am) a HUGE West Wing fan. I own the entire series on DVD and used it as a fantasy media narcotic to cope with the Bush administration. 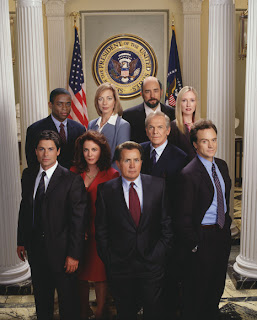 In a recent New York Times editorial, Maureen Dowd contacted West Wing creator Aaron Sorkin to ask him what a conversation between Democratic presidential candidate Barack Obama and fictional Democratic president Jed Bartlett would look like. This is what he imagines (click here).

I can't resist copying an excerpt from this fictional exchange because it captures so much of the ANGER I have also felt over the past decade, especially the last seven years of this Republican administration:

"OBAMA The problem is we can’t appear angry. Bush called us the angry left. Did you see anyone in Denver who was angry?

BARTLET Well ... let me think. ...We went to war against the wrong country, Osama bin Laden just celebrated his seventh anniversary of not being caught either dead or alive, my family’s less safe than it was eight years ago, we’ve lost trillions of dollars, millions of jobs, thousands of lives and we lost an entire city due to bad weather. So, you know ... I’m a little angry.

OBAMA What would you do?

BARTLET GET ANGRIER! Call them liars, because that’s what they are. Sarah Palin didn’t say “thanks but no thanks” to the Bridge to Nowhere. She just said “Thanks.” You were raised by a single mother on food stamps — where does a guy with eight houses who was legacied into Annapolis get off calling you an elitist? And by the way, if you do nothing else, take that word back. Elite is a good word, it means well above average. I’d ask them what their problem is with excellence. While you’re at it, I want the word “patriot” back. McCain can say that the transcendent issue of our time is the spread of Islamic fanaticism or he can choose a running mate who doesn’t know the Bush doctrine from the Monroe Doctrine, but he can’t do both at the same time and call it patriotic. They have to lie — the truth isn’t their friend right now. Get angry. Mock them mercilessly; they’ve earned it. McCain decried agents of intolerance, then chose a running mate who had to ask if she was allowed to ban books from a public library. It’s not bad enough she thinks the planet Earth was created in six days 6,000 years ago complete with a man, a woman and a talking snake, she wants schools to teach the rest of our kids to deny geology, anthropology, archaeology and common sense too? It’s not bad enough she’s forcing her own daughter into a loveless marriage to a teenage hood, she wants the rest of us to guide our daughters in that direction too? It’s not enough that a woman shouldn’t have the right to choose, it should be the law of the land that she has to carry and deliver her rapist’s baby too? I don’t know whether or not Governor Palin has the tenacity of a pit bull, but I know for sure she’s got the qualifications of one. And you’re worried about seeming angry? You could eat their lunch, make them cry and tell their mamas about it and God himself would call it restrained. There are times when you are simply required to be impolite. There are times when condescension is called for!"

As one West Wing fan to another THANKS for posting that. I soooo missed those Jed off the wall speeches in the last few years of WW. And yes Allison Janney is just the bomb or in her language the bee's knees. I have been saying all along whats wrong with being sent to the dictionary? Only thing missing was a little latin.

Hi dj,
Thanks for leaving a comment and sharing your WW love this morning. Bees Knees--why don't we talk like that anymore? Maybe I should try to start a resurrgence of this phrase.

As for Jed & his liberal rants--YAY TO LIBERAL RANTS (of course not all of them were liberal, he had quite a few about blowing people out of the sky, but I think that was a visceral reaction and Pres. Bartlett always ruled as rationally as he could and took the moral/ethical consequences, as much as his fictional self could).

As for being smart...about to write on that today.

Thanks for stopping by--please feel free to leave more comments!