These are a few of my favorite things...

I had started to write this post that was basically a list of complaints--things I have been feeling peevish and petty about lately.

But I erased it. I'm tired of negativity--in myself and in others and in the world. So this week I'm going to try an experiment--to focus on the positives. A list of my "favorite things" for the week if you will. 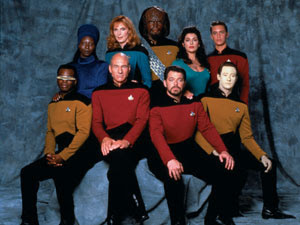 Star Trek: The Next Generation

This show, which was the "sequel" to the original series of the 1960s, ran from 1987-1994. It started off sort've shaky but quickly developed story lines and characters that were compelling and interesting and thought provoking.

Much has been written about the original series in terms of its progresive stances--that the first televised "inter-racial kiss" occurred between Kirk & Uhura. And that the original crew was comprised of people who "represented" a variety of races (and species if you count Nimoy's Spock)--a truly diverse cast. Well, certainly progressive and diverse for the mid-1960s.

And while the cast of The Next Generation was not as diverse as the original (I mean, you'd think that over 20 years later they'd manage to find a Latino or Asian crew member for the regular cast and not just a minor recurring role), it certainly was more diverse than many other casts on network tv (and that remains true TODAY--which proves that in over a decade we're STILL not at a place where we see real diversity on television).

Still, the show made a stab at diversity. But really, it was the writing. The writing for the show was good. And so was some of the acting (I mean, Patrick Stewart is a classically trained Shakespearean actor). And lucky for me, the Sci-Fi channel shows re-runs of the show, and right now they are showing the two-part finale.

So in honor of Star Trek: The Next Generation, let me say that I hope we will boldly go where no one has gone before (you can interpret that however you like, but of course, think politically...)
Posted by Jennifer at 9:21 PM

Email ThisBlogThis!Share to TwitterShare to FacebookShare to Pinterest
Labels: a few of my favorite things, diversity in network television, Star Trek: The Next Generation

Woot! I also loved ST:TNG (though it could get a little preachy at times...I was never a big fan of the Prime Directive). Plots ran the gamut from very interesting to mildly clever to somewhat trite, but the characters were the most enjoyable part...Data was always my fave, though I really liked Tasha Yar (until they killed her off). The dialogue and humor were usually excellent.

Got a favorite episode? Mine would have to be "The Most Toys".

So hard to choose just one...but if I were forced to pick, I'd say "Inner Light"--the one where the Enterprise encounters a probe and Picard lives this alternate live in an alternate universe. I think it speaks to something primal in all of us who wonder about roads not traveled and other lives we could have lived. In Picard's case, he got to do this.

But then I also really love the one where each of the crew members take on roles on the ship that are counter to their natural leadership abilities--Troi has to be the commander, Picard is stuck with kids, and Worf has to deliver a baby (I think it's called "Disaster").

Of course, the finale is also pretty good stuff too... oh my list could just go on and on!

(New to your blog, and enjoying what I've read so far...)

I'm also a ST:TNG fan. One of my favorite things about the show was the friendship between Data and Geordi. My favorite episodes were the ones that involved the Borg (Best of Both Worlds).

I also enjoyed the show that came after TNG, Star Trek Deep Space Nine. The show attempted to go deeper into subjects like religion, terrorism, and the legacy of war. The cast was also quite diverse. (African-American commander and his son, female science officer, Arab doctor).

Hi DaisyKingston,
Thanks for finding your way to this blog--and for leaving a comment!

I think, because I'm such a devotee of ST:TNG, I never got into any of the off-shoots, like Deep Space 9 or Voyager or the new series Enterprise. Although I do agree that Deep Space 9 has a more diverse cast. I don't know whether it was the storylines or the characters/acting, but it never grabbed me the way that ST:TNG did.