"This Defining Moment in History" 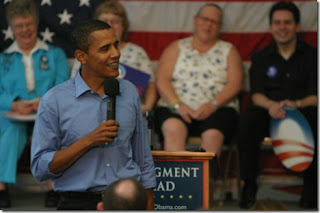 Barack Obama has won the Iowa Caaucuses by 38% (about 8% over Edwards and 9% over Clinton). In his own words, he has said:

“They said this country was too divided, too disillusioned to ever come together around a common purpose. But on this January night, at this defining moment in history, you have done what the cynics said we couldn’t do.”

I continually tell my students that the Civil Rights Movement did not happen that long ago--that only 50 years ago, the nation was in a state of racial disharmony; segregation and Jim Crow were only starting to be challenged.

Who would have thought that in 50 years we'd be seeing a truly viable candidate who identifies as both African American and mixed-race. Who has transnational and transracial ties. Who has invigorated voters across the spectrum, especially independent voters like this journalist (click on link).

I think we have to wait and see what will happen in New Hampshire and South Carolina and, of course, the Democratic National Convention and the election in November 2008. But no matter what else, Obama is right--winning Iowa was a defining moment in history in terms of race in America.
Posted by Jennifer at 8:13 AM

Good post. In my blog comments, you mentioned the nastiness that has already started on the right. I've been afraid to look at any right-leaning sites because I'm on such a buzz from last night (and Obama is second choice candidate). With the mood I'm hearing from the country following Obama's speech last night, I think the Rovian meanness will backfire this time. I hope, I hope.

Tami,
I hope you didn't think I was being a killjoy, because you know how I feel about Obama. And honestly, it all stemmed from me trying to find an image of Obama to use in this posting and I came across an image of a monkey with his name on it, and it led me to a conservative blog site, and well, you can guess the rest. I was so upset reading that blog. And color me naive, but I really didn't think we were going back to making the African American-Simian analogy. I was shocked and upset.

But I hope you are right--that the Rovian thing will backfire--that the overt racism will backfire. It's not the overt stuff I'm worried about. Anyone reading this blog and seeing that photo will understand the blatant racism of it. It's the subtle stuff. Anyone can look through the falafel jokes and terrorist references and see them for what they are. But the constant questioning of whether we are ready to elect a black man as president...I mean, in some ways it's a valid question in the context of a the history of racism and colonialism and oppression in this country. But the glib repetition of it post-Iowa spin makes me feel like it's planting this seed of doubt.

That's why I posted before about wanting people to ask our white male candidates whether they are "white" enough to win the vote--I just think this constant barrage and focus on blackness as if it were the only racial category at play when whiteness goes unchecked and uncommented on all the time.

(she now descends from soapbox)

Sorry--meant that to be a brief response to Tami's comment and I just went on and on.

But yes, I do feel a sense of hope about the Democratic party being galvanized. I'm not sure I have a second choice--I think I feel about the same on Edwards and Clinton (although I do like Edwards work on poverty) but truly, I will support and work for any Democratic candidate to make a viable run for the white house in November.