And now a word from Nobel Laureate Toni Morrison

[excerpted from a letter sent to Barack Obama, released by the Obama campaign today, which acknowledges Toni Morrison's endorsement of Barack Obama, her first ever of a presidential candidate]

"In thinking carefully about the strengths of the candidates, I stunned myself when I came to the following conclusion: that in addition to keen intelligence, integrity and a rare authenticity, you exhibit something that has nothing to do with age, experience, race or gender and something I don't see in other candidates. That something is a creative imagination which coupled with brilliance equals wisdom. It is too bad if we associate it only with gray hair and old age. Or if we call searing vision naivete. Or if we believe cunning is insight. Or if we settle for finessing cures tailored for each ravaged tree in the forest while ignoring the poisonous landscape that feeds and surrounds it. Wisdom is a gift; you can't train for it, inherit it, learn it in a class, or earn it in the workplace--that access can foster the acquisition of knowledge, but not wisdom."

To read the full letter, please click on this link to The New York Observer. 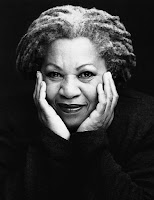 For anyone who doesn't know who Toni Morrison is, in addition to holding a Nobel Prize in Literature, a Pulitzer Prize, National Book Critic Circle's award, and countless honorary degrees and awards, she is one of the most lyrical voices in American letters. I loaned a copy of Beloved to a friend attending law school in Boston, and he cried on the "T" when he came to the scene of Paul D and the men moving through the mud. I teach The Bluest Eye on a regular basis, and each time find something new to marvel at.

I don't know how much Ms. Morrison's endorsement will do for the Obama campaign (and I do think that people need to make up their own minds about who to vote for, regardless of who is endorsing a candidate) but I also must say that it gratifies me to see Ms. Morrison's endorsement of Obama, and perhaps very superficially and selfishly, the letter she wrote was another example of her lyricism, so it was simply a pleasure to read it, to hear her poetic voice describe why she supports Obama, who may just be our first African American president.

[Addendum: 1/29/08: For an insightful analysis of the misappropriation of Toni Morrison's words in being the one to call Bill Clinton our first "black" president, check out this latest from "What Tami Said." I actually remember reading that essay in The New Yorker years back, and it's sad to see how Ms. Morrison's words and intent are being distorted by everyone, but of course, not surprising.]
Posted by Jennifer at 5:52 PM