Who do you root for?

Unless you've been truly living off the grid and avoiding human contact & any form of news, then you know that the London Olympics have started. 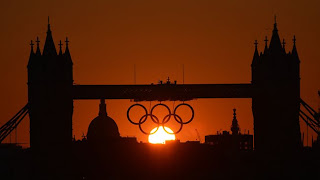 I must confess that I'm a fan of the Olympics.  I know that there are many critiques one can level at the IOC (International Olympic Committee), at the amount of commercialism, the problems of corporate sponsorship, and jingoism that can get out of control.  But there is something I find spell binding about seeing people push themselves to their athletic limits--to see them excel in sports that they have devoted themselves to for most of their lives.

Which brings me to the title of this post: Who do you root for?

The natural answer is the country you identify with--but for those of us with multiple heritages and/or passports, this can be a thorny answer.

One of the things I've realized is that I am drawn to rooting for people of color.

For example, I'm a Top Chef fan and at the beginning of every season, I find myself rooting for the chefs of color--unless, of course, they turn out to be super annoying, jerks, or just not plain good.  Which does happen.  In the last season, I was NOT a Beverly fan but I was so happy Paul won.

This isn't to say that I don't root for non-people of color.

If you've been following Olympic swimming then you must know who Missy Franklin is--and from the feel good piece that NBC did about her and her family, she just seems like an incredible athlete, with an amazing personality and a very down-to-earth family.  She has turned down extraordinarily lucrative endorsement deals because by turning professional she wouldn't be able to compete for her high school swim team.  You can't put a price on loyalty like that. 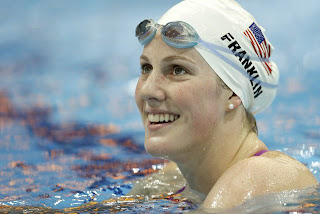 But if I have to be honest, I am drawn to the athletes of color.  Especially athletes that look like they may be multiracial, like Kyla Ross, a member of the Fab Five who just took home gold in the team gymnastics event last night. 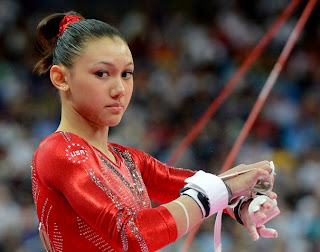 When I saw her and her teammates featured on the Today Show at the start of the Olympic games, I immediately googled her because I thought she might be mixed race.  And sure enough, I found an article that described her background--her father is African American and Japanese and her mother is part Filipina and part Puerto Rican.

Then there's John Orozco, a gymnast who visibly looks black but who identifies as Puerto Rican. 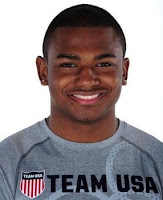 There's a Washington Post article that talks about the increased diversity in US Gymnastics and lists Orozco along with Gabby Douglas and Danell Leyva.  No mention of Kyla Ross, which strikes me as a BIG oversight--I'm not sure whether being of part Asian heritage or being mulitracial kept her off the radar of the Post (or it could be that she's not one of the more prominent members of the Fab Five).  But it is good to know that diversity (a buzzword that I find annoying but I get that the Post is using it as a shorthand for racial diversity in a sport that is predominantly white and middle class) is being recognized/talked about in terms of the Olympic athletes.

[Note: There has been some speculation about whether Orozco is adopted or not--apparently this website suggests that he is, indeed, adopted, and might be of Dominican heritage--but on his official site and in news pieces his parents are described as his parents--whereas one of the things I find a bit disconcerting are the ways in which sometimes Dannell Leyva's father & coach is referred to as his stepfather and sometimes his father]

The last thing I'll end with is that sometimes rooting for the person of color or multiracial American can really backfire on you.  Case in point: I'm currently watching the TBS sitcom Sullivan & Son.  Starring Steve Byrne, a comedian who is half Korean and half Irish, Byrne plays the "son" of a Korean immigrant mother and Irish American father. 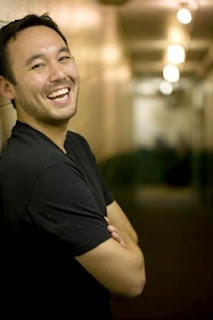 I've seen 2 episodes so far.  Both were dreadful.  I could go on about the sexism, the local bigot who makes racist jokes, homophobic jokes, and sexist jokes (like some kind of archaic Archie Bunker figure--I figure in time he'll start in on the environment and vegans), about the not-so-subtle forms of homophobia (see above Bunker figure--it's like the producers get to have it both way--they get the old white geezer to make the gay slur and we get to laugh at the joke and laugh at the geezer and know that we shouldn't be laughing at the gay joke because it's wrong but we're still laughing anyway), and the really bad jokes about his Korean tiger mother.  But what makes Sullivan & Son so dreadful is that it's simply not funny.  The storylines aren't compelling.  The characters aren't well developed.  And again, they just don't bring the funny.

So I'm going to give Sullivan & Son a chance.  There will be a tipping point -- there will be a moment when I won't be able to take it: the bad writing, the sexism/homophobia, the lack of funny.  But for the time being, I'm rooting for Byrne and hoping that he can shape up or else I'll just tune out.

I have been glued to the television. I figured Kyla was interracial but didn't look it up. I was so pleased our teams are racially diverse -- a true reflection of our country! I root for the US but I tend to get excited or disappointed for all the athletes. They spent four years (or longer) training for this, and the pressure must be tremendous! I cried for the Russian gymnasts last night even while celebrating the victory of the Fab Five.

As for racially diverse TV, watch HGTV, one of the most diverse channels on TV. I'm addicted to it just for that reason. Here's my blog post on it:

Hi Jennifer, I have a post listing the multiracial Olympians here http://mixedamericanlife.wordpress.com/2012/07/30/olympians-2012/

Also, DailyMultiracial.com is featuring them now.

"Then there's John Orozco, a gymnast who visibly looks black but who identifies as Puerto Rican."
You do realize those are not mutually exclusive? jeez, come on!

Yes, I meant to write that Orozco looks African American and identifies as Puerto Rican--that's what I should have written. The "jeez, come on!" combined with no real handle but some weird number/alpha combo, sort've rubs me the wrong way. I do appreciate being called out -- because Latinos are a mixed race group and in terms of complexion run the gamut from Anglo to Afro, but I think I would have preferred your rejoinder to have been couched in more constructive or less belittling language.

Glenn,
Thanks for the link--am definitely going to check that out now! Thanks so much for stopping by and leaving a comment.

Dianne,
I know what you mean about wanting to root for everyone--I always feel bad when people work so hard and then there's one mis-step and they fall short of their goals. I'll definitely check out your post too!

you know what the real shame is, is that the american athletes have to pay taxes on their winnings and medals. i read an article that missy franklin already owes something like $14,000.

Nathan Adrian if you want to highlight mixed-race athletes! The most exciting non-Phelps race of the swimming!

It might turn around. I haven't watched any television in almost a year, but I remember Parks and Rec started out terribly unfunny and derivative, but now it's the funniest show on TV (or was a year ago).

David,
You may want to read this article in The Atlantic: http://www.theatlantic.com/politics/archive/2012/08/why-marco-rubio-is-wrong-on-olympic-winnings/260626/

I have to say that I'm not too worried about Missy Franklin being taxed considering the endorsements she's going to wind up with.

Heidi, yes, Nathan Adrian has recently been on my radar--seems like such a nice guy, although the nickname that his female teammates gave him, "bok choy"... well, I don't think I need to say anything about THAT do I?

And Matt, one can only hope that Sullivan & Son improves--it certainly doesn't seem like it can get any worse...although maybe I shouldn't say that because I'm SURE it can get worse very quickly.