It is July 1 -- the middle of summer.  The time of year when, if you are an academic who is working on a project, you wonder and worry about how much time left before the start of the school year and putting your research project on hold.  In my case, I am blessed with enormously good fortune.  I will be on sabbatical all next year.  I will not have to teach fall or spring semesters.  I am not teaching this summer or next summer.  I am simply researching and writing.  The goal: finish the book.

There's a lot that's applicable to a blog called Mixed Race America in terms of these kinds of issues.  I will say that historically, in the U.S., multiracial children have had the hardest times being placed for adoption and that many agencies had very racist restrictions against placing multiracial children because the idea was that (1) you should match children to parents -- blond headed blue eyed boys with blond headed blue eyed parents  (2) if you matched successfully you would never need to tell your son/daughter that s/he was adopted.

The point of this post is really to highlight an exceptional filmmaker: Deann Borshay Liem. 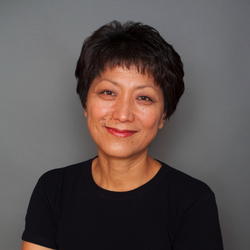 Liem has two documentaries that chronicle her adoption from Korea: First Person Plural and In the Matter of Cha Jung Hee.  I teach First Person Plural in my classes, and I had the pleasure of seeing In the Matter of Cha Jung Hee when Liem screened it at the Association of Asian American Studies conference two years ago (I've since purchased a copy).  Both are remarkable films--very moving, very thought provoking, very insightful into the politics of transnational adoption and the complicated layers of belonging and family-feeling in transracial adoption.

Now Liem is working on a new documentary, Geographies of Kinship: The Korean Adoption Story.  I've embedded a video preview of the film below:

Currently, Liem is looking for financial support to finish her film--which from the looks of the trailer is going to be an incredibly powerful, moving, and important film.  She has a Kickstarter campaign and there's 30 more days for her to reach her goal of $75,000 (she's already raised $14,000+).  If you are as moved by the trailer to her film as I was, please consider giving, even just $5 to her Kickstarter campaign (and you can find the page here).  Of course for $100 you can get a signed copy of the film and the satisfaction of knowing that you helped a very talented filmmaker finish what is sure to be an excellent film.

Finally, let me leave you with a video interview that Liem did with POV after her initial film, First Person Plural was picked up by POV/PBS and was showcased at film festivals around the U.S.: