I've caught the fever and it's called LINSANITY

I've been wanting to write, for over a week, about the phenomenon we now refer to as "Linsanity" -- the rise of NY Knicks point guard Jeremy Lin. 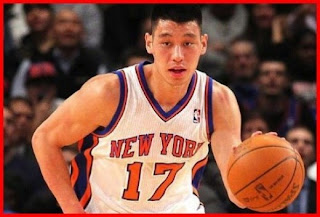 If you live in the U.S. or China/Taiwan, you have not been able to not hear about, read about, and watch the highlight reels of Jeremy Lin tearing up the court at Madison Square Garden and at basketball arenas around the nation (and across the border in Toronto). The general rhetoric is that he came out of nowhere, an underdog who was underappreciated and undervalued, and now he has risen to stratospheric heights, saving the Knick's season, reinvigorating fans in NYC (and around the nation), and inspiring Asian Americans to claim Lin as Ours--he is one of us.

That's a very powerful notion for Asian Americans--that we are seeing, EVERYWHERE, the face and body of a male Asian American athlete on a national stage--that we are watching Jeremy Lin hold his own night after night, quelling the nay sayers (and the haters) about being a fluke and showing that he had always had talent, but it was obscured by the stereotypes and misperceptions that people associated with college and professional basketball (and really mainline college and professional sports) have about Asian American athletes: we aren't really real.

And it's painful to not be really real. It's not just Asian American athletes who suffer from this perception--it's the way in our 21st Century society has made "real" what you see on a screen--whether it's the tv screen, the movie screen, or your computer screen. If it's not an image for mass consumption, it doesn't exist. If you aren't being represented on a sitcom, opening up a blockbuster movie, passing a ball or playing at the Grammy's, you're not real.

Asian Americans have not, historically, had a lot of positive screen time--and certainly haven't had screen time outside of pretty stereotypical roles--the martial artist, the geisha, the enemy soldier or war refugee, the nerd.

But now we've got Jeremy Lin!

And while I don't want to overstate his importance, there is no escaping that we are in a moment--and that particularly for Asian Americans, there is a sense that finally we have someone--someone who is getting a lot of screen time. Someone who defies stereotypes. Someone who has grabbed the nation's attention and is succeeding in an arena reserved for the most masculine of athletes (and this is additionally significant in terms of the way that Asian American men have traditionally been portrayed, especially in the media, as feminized and weak).

There's an especially astute post by my friend and colleague, Timothy Yu--it's long but it's definitely worth reading because Tim really gets at the heart of why Jeremy Lin is so important to Asian Americans at this particular moment, especially Tim's last line:

I don't know how long Linsanity will last--like all things, there will be a time when the Knick's winning streak will end and at the very least if the improbable happens and Lin keeps winning and winning, the basketball season will come to an end. And I know that there's also going to be the inevitable racist comment (there have been some minor ones already)--and certainly Lin has already faced racist taunts before. But what is important in the here and now are all the ways that Lin is inspiring to so many. And while I know I've concentrated on how he is an inspiration to Asian Americans, I feel really gratified to see that at least among some journalists, there has been an effort to do real racial analysis that is thoughtful and that recognizes all the ways that Lin has been overlooked and underappreciated because of society's stereotypes of who can play basketball. In other words, Lin's race matters.

Then again, I always think race matters!
Posted by Jennifer at 7:43 AM

Terrific post and so true! It's the same feeling the black community has about President Obama. It's validation, even as others scoff at the notion. My husband never pictured himself as a firefighter because when he was growing up, they were all white. But he and many other black firefighters proved anyone could become a firefighter who has an interest and the intellectual and physical ability to learn the job. We have to open our minds to the fact that any individual can accomplish great things if allowed to grow to his/her potential rather than be limited by socially constructed bias and stereotypes.

Fourth-generation Asian in the West said...

I noticed that mainstream news channels in the US refer to Jeremy Lin as being "from Taiwan" when he was born in the US, grew up in California and is for all intents and purposes a Chinese American. This seems to be symptomatic of what Dr. Frank Yu, Ph.D coined, the "perpetual foreigner's syndrome" whereby Asians in the West are regarded as inassimilable, non-citizens and sojourners. Is America being the Manifest Destiny of whites only--why the need to explain him as being from somewhere else?