Yesterday I got an email letter from Brian Pines of the "It Gets Better" Project. I know there has been some controversy around the project--some saying that it has devolved away from its original mission to support queer youth and the bullying that they endure in school. Some saying that it's message is too feel-good and doesn't do enough in terms of activism. But I suppose I'm a moderate in the sense that I think any message that attempts to reassure and tell a teenager that they aren't alone--that there are others who have been through similar experiences--who were bullied--who thought about suicide--who didn't know who to turn to--that things get better--that they aren't alone--that there are people and organizations who can help...I think that's not a bad message to send out.

So today, October 20, is Spirit Day--a day that the "It Gets Better" Project has marked for support of LGBT youth.

I, unfortunately, do not own anything purple, but I DO support queer youth and queer people and their right for society to recognize their humanity. And I support our society growing and progressing so that we are inclusive of all people -- so that we will stand up to bullying and support queer youth especially who may feel alienated in their homes, schools, communities.

And I found this image--and if we replace "purple" with "LGBT/Queer" youth, then I think it's quite appropriate: 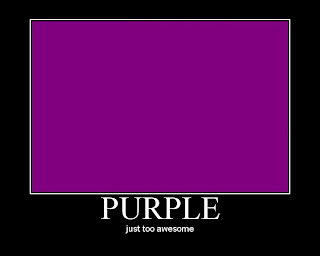 Email ThisBlogThis!Share to TwitterShare to FacebookShare to Pinterest
Labels: It Gets Better Project, Spirit Day is October 20, supporting queer youth and LGBT teens