Should I do a postcolonial reading of Willy Wonka or can I just enjoy the songs?

So I was channel surfing last night and came upon the vintage Willy Wonka and the Chocolate Factory -- the one with Gene Wilder being slightly creepy (of course, it could just be the hair and eyes). It was early in the film when the kids are frolicking in the candy garden with the chocolate waterfall--Wonka is singing that song "Pure Imagination" and all is sugary bliss when Southern Man asks, "Hey, how come there aren't any black people in this film? Where are the people of color? Are the Oompa Loopmas supposed to stand in for them? And isn't that racist?" 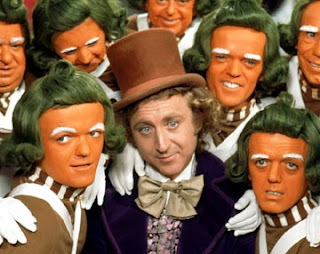 Now part of my reaction was "Darn it! You stole my line!" I mean, that's usually ME going on about representations of race and racialization and white supremacy. And especially remembering the illustrations from the original I read as a child and the story that Wonka tells about "saving" the Oompa Loompas and that they love working at the factory for free as long as they can eat cocoa beans....well, it's a tale redolent with exploitation and racial hierarchization. The lack of people of color is part and parcel of the way films were made in the 1970s and part of the larger problematics of the world in Dahl's novel. But here's the rub: I love Roald Dahl's novels. And I love the Willy Wonka film--as problematic as the underlying narrative of exploitation is. And in an odd reversal, I was the one telling Southern Man that I didn't want to think about these things and just wanted to watch the movie (it has been a hard few weeks...more on that later).

But still. I can't turn off that part of my brain. Hence this blog post this morning. And of course, even with the update in 2005 with Johnny Depp filling in for Gene Wilder, we still get the cloned image of a dark skinned man as the oompa loompa par excellence. 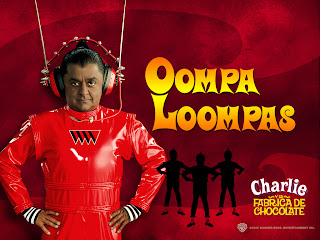 That Southern Man...he puts me to shame with his spot on analysis of race and popular culture. Gotta get my A game on.
Posted by Jennifer at 8:15 AM

Email ThisBlogThis!Share to TwitterShare to FacebookShare to Pinterest
Labels: problematics of race in Willy Wonka and the Chocolate Factory

I found out the original Oompa Loompa's were African Pygmys a few years ago.
I love the movie and the edited book.
On the one hand I don't want to support racist media, on the other hand if I eliminated all racist media I'd have no mainstream media to enjoy.

ah, willy wonka. pretty good movie from my childhood. gene wilder is definitely better than johnny depp...but enough about that. although this is one of these things where I say "I don't know and I don't care," not because I'm being insensitive but because it's a part of my child hood and I don't want to tear that down. Just my two cents.

That's the thing, privilege is ingrained in our culture we think of it as our innocence. Our children are raised with these heart-warming stories that they'll continue to turn to later on in life. And bam, there it is: "you're a white male child and this world is yours, you didn't even have to do anything to get it."
We have to establish new stories, stories of empowerment, stories that combat the privilege mindset.

Hi All,
Thanks for your comments--there is a part of me, esp. when I get tired or am having a bad day, that just wants to turn off the analytical/critical part of my brain and say "Damn it! I don't want to think about this on a deeper level."

But then I get untired or I think that the trick is to try to think about both. To think about how I can enjoy something but still critique it. And I wholeheartedly agree with The Don of Time--we absolutely need to have new narratives and new stories. The old ones are too seductive and our own sentimental tendencies with nostalgia might mean we don't want to look at something deeper. But if we're really committed to social change, it's precisely these types of stories that have embedded racist (and sexist/homophobic) structures that we absolutely have to question.

I never took the time to analyze this movie. As a kid, it freaked me out, and I simply never wanted to think about it.

I know what you mean--I think as kids we aren't really equipped to analyze things this way right?