So there are two things that I want to promote today because I'm a fan of both for different reasons. The first: Moth podcasts. If you don't know what they are (if you aren't a regular This American Life listerner) let me explain. There is a venue in NYC called "The Moth" where average folks (and some not-so-average-more-well-known-celebrity-type people) get up on stage and tell unscripted stories about their lives--little life vignettes if you will.

I started to subscribe to The Moth podcast about a month ago--and my most recent download featured another promotion I want to make: Dan Choi. 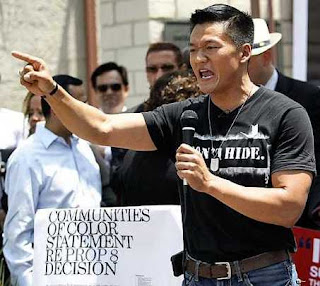 If the name rings a bell, it may because you remember seeing a former post here and here. To recap, Dan Choi, a former lieutenant in the Army, a West Point Grad, and a gay man, has been dishonorably discharged for being in violation of "Don't ask, don't tell" (he's proud and out) and has been fighting this policy and fighting to be reinstated in the military. He helped to found an organization called Knights Out, which is an organization of West Point alumni, faculty, and staff who support the queer military community.

And as I mentioned above, he was featured on The Moth talking about his experiences being in Iraq, serving, in the military, and falling in love for the first time with someone he tells his colleagues is named "Martha" but whose real name is "Matthew."

Two great things that go great together: The Moth and Dan Choi. If you've got 15 minutes, head over to The Moth website (it's also on the Knights Out website) and take a listen for yourself.
Posted by Jennifer at 8:02 AM

Amazing! That was just wonderful. Thank you so much for sharing!

Do you know what poem he recited at the end of his story? I thought it was fantastic. Let me know: jharlanhopple@gmail.com