There was a comment posted on the "White Spokesperson" post from a few days back that has led me to think about the ways that Hollywood is particularly guilty of taking on a "white spokesperson" role for people of color.

What do I mean? Let me illustrate using three films (and I'm sure others can think of even more!) 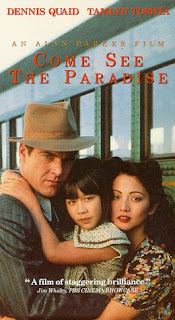 Come See the Paradise is a film about the Japanese American internment, but the Hollywood Studio that produced and distributed it was clear that there needed to be a white male hero in the lead; that a film about Japanese Americans during WWII could not be about the infringement of their constitutional rights based on racial discrimination (isn't that a dramatic story??!!) but needed to be an inter-racial romance, with a historical backdrop of discrimination. 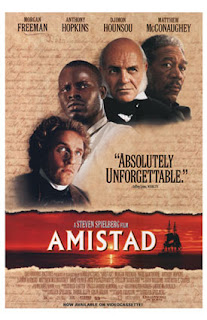 Amistad is another film in which white male figures take the leading roles in a historical drama about non-white people--this time it's the transatlantic slave trade. The director Stephen Spielberg, or "Mr. Happy Ending," has made a film about slavery that ends on a positive note--the Amistad slaves get to return to Africa. (For more on Spielberg's record of happy endings to otherwise tragic and traumatic events see the endings to Saving Private Ryan and Schindler's List to see what I mean.) Don't get me wrong--it's not that I don't think there should be a happy ending to slavery, but the truth is, the Amistad case was exceptional; the reality of slavery and a film about slavery would actually not end quite so happily and we should not feel quite so good, as an audience, about the historical record of the transatlantic slave trade. And this film may blur that reality by ending on such a happy note--when the reality for the majority of African slaves and African Americans in bondage during the antebellum period was one of brutal indenture. 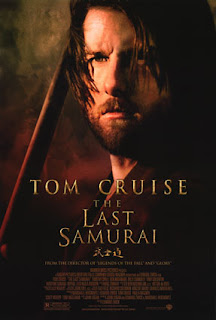 Last but not least, there's my all-time favorite, The Last Samurai. Although, ostensibly, the film's title is supposed to refer to the actual "last samurai" in the film (played by the wonderful Ken Watanabe) the movie poster and the film's narrative concentration make Tom Cruise's character "the last samurai." This film really takes the cake in terms of Hollywood whitewashing--Cruise goes from being a boozed-up, washed-out Civil War veteran to the heroic central figure, out-Japanese-ing and out-Samurai-ing the actual Japanese and Samurais he comes into contact with.

And really--why can't we have stories of slavery, of internment, of other historic events featuring non-white people in which there is not a white lead who steals the central role as savior, as hero, as rescuer? Why, Hollywood, why???!!!
Posted by Jennifer at 10:27 PM

This goes well with your post about "Africa" as a country, as well. Think to almost any movie that involves an African nation playing a central role, and it will most likely be about a white "development worker" or other such "hero" and then all the strange, primitive "Africans" that they get to know. "The Last King of Scotland" is a prime example of this - and a movie that frustrated me on so many levels. A good Ugandan doctor sacrifices himself to save the stupid, selfish, philandering white guy who deserves to die because the white guy is more valuable. I'll just stop there.

The flip side being any movie about a teacher in "inner-city" America "changing lives" - always a white teacher with a predominantly black and Latino class. Boy, does America like to see white people converting and saving the heathens . . .

CVT,
You know, I just saw LAST KING OF SCOTLAND, and it disturbed me on many levels, but it was how the Scottish doctor was "saved" at the 11th hour (and how he let himself be saved) by the Ugandan doctor that stuck with me and bugged me and left a bad taste in my mouth. And it frustrates me because this was one of the better films--this was one of the films that I think was trying to SHOW the selfishness of this white guy and the myopia and dangerous privilege that he had in NOT examining what was going on, until too late. So it was doubly disappointing that this is the most indelible last image/message that we can take home, which just reinforces the whole thing about the value of white lives over black lives, which I'm sure was not the intention of the filmmakers, but it goes back to the pernicious power of racism especially connected with a colonial legacy that makes it nearly impossible (or at least damn difficult) to try to escape this trap.

By the way, if you haven't already, go back to the November archives and find "Teaching Tolerance" because while I agree that Hollywood has a penchant for the liberal white teacher going into the inner-city and transforming the brown skinned pupils (MUSIC OF THE HEART, DANGEROUS MINDS, and that latest film with Hillary Swank that I can't remember), there are interesting exceptions--like STAND AND DELIVER, LEAN ON ME, and the one I write about in this post, TO SIR WITH LOVE, which really up-ends expectations, even though they had to transplant Sidney Poitier to England to make this message palatable.

To Sir With Love was based on the memoir of a real man (E.R. Braithwaite) from Georgetown, Guyana who went to teach in the East End of London. I think it would have been an error to transplant the story to the US, just to make it more specific to American race relations. In a way, it's like the whitewashing thing, to americanize all black-diaspora experiences.

One of the reasons this was formative to me in my youth was that it was one of the first things I ever saw that showed black people as not just being American or "African". I knew in an abstract sense that there were black people all over the world, but to see black Britons experiencing similar things to what we experienced in the US back then made me feel a connection that I hadn't felt before.

Thanks Theora for the tidbit about TO SIR WITH LOVE being based on a true story--I think I had heard that but didn't know the particulars--so it does make sense that it was set in Britain if that is the trajectory of this man's life.

I guess I'm curious as to why they had Sidney Poitier...actually I'm not. He's an AMAZING actor and given the dearth of roles for any black actors of any background, period, it makes sense that they would want to cast a wellknown actor in this role. But it does seem like there might have been a very talented black British actor just waiting to jump at the chance to play this role.

Again, not that I'm sorry that it was Poitier in that role, only that I do think that the versimilitude is not quite as accurate with an actor with an Americanied accent (although I do think they explain that he spent some years in America...)

Thought this would be a good place to give you this link about an article regarding the current Vanity Fair Cover.

Hey FB,
Thanks for the link to the article on the Vanity Fair cover story. So NOT surprised--I mean, if your idea of reality is Hollywood and magazines, then you just think it's normal to see so many white folks in the world, when the reality is that we're really not a 90% white world (isn't that what it feels like when you watch most films and/or tv series?).