So here's part 2 of my 3 part review of Cloud Atlas (click here for part 1).  Today's topic: the film's use of yellowface and other Orientalized aspects of Cloud Atlas.

There are many people who have written about the phenomenon of "yellowface," which is the Asian version of "blackface"--having white (although at times there have been black) actors and actresses portraying Asian and Asian American people in Hollywood films.  Racebending.com has a particularly astute and thorough accounting by contributor Michelle I.  I recommend reading her piece, "Yellowface: A Story in Pictures," to familiarize yourself with the LONG history of yellowface in Hollywood cinema.  But I think this photo of Mickey Rooney in Breakfast at Tiffany's probably says it all:

As I wrote about in yesterday's post, there's a certain narrative logic that the filmmakers had in mind for putting their non-Asian actors in yellowface (including the African American actor Keith David in a role that reminded me of Laurence Fishburne in The Matrix, if they had taped back Fishburne's eyes).  One of the themes of the narrative (film as well as book) is a repetition or eternal recurrence of experiences, of relationships, of people with a comet birthmark who show up across space and time.  To connect these otherwise disparate narratives, the filmmakers chose to have actors and actresses play various roles in all six segments/stories of the film -- so Halle Berry has a throwaway minor role as a woman dressed in a sari (she's supposed to be an Indian woman in London) but in two other stories she has a major role (as a Latina reporter in 1970s SF and in the future as a post-apocalyptic survivor who has access to technology).  One of the stories takes place in 2144 in Neo Seoul, a dystopic "corporocracy"where "pure bloods" are consumers and "fabricants" are the cloned humans who serve them.  So that brings us to the white actors playing Korean or Neo Korean men: Jim Sturgess without the yellowface Hugo Weaving as himself 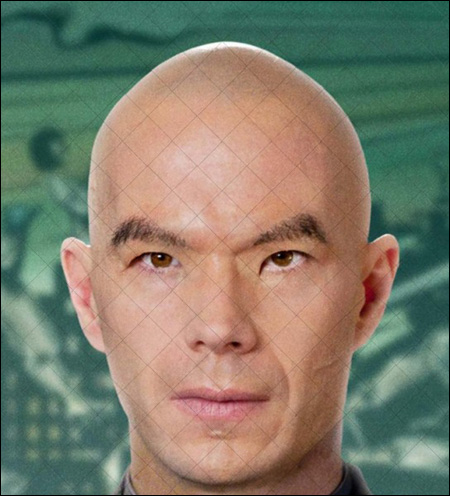 James D'Arcy as himself

I'm not sure whether to say that the film's makeup and special effects department did a "bad" job in the yellowface department.  I mean, given their task, this may have been the best they could do, although one would think that if you could turn Eddie Murphy into an old white Jewish man, you could do a better job with Hugo Weaving.  I didn't really find the yellowface all that believable with these actors.  Perhaps because I had been seeing them throughout the film in their non-yellowface roles.  While I understand the impulse to want to use the same actors in all the segments of the film, there are things I wondered about, for example:

1) In the first segment, which takes place aboard a schooner in the mid-19th C., the Polynesian/aboriginal "slaves" are portrayed by African American and Afro-British actors.  It could be that the film decided to transplant African slaves into the South Pacific, but I wondered about why the filmmakers didn't just hire aboriginal/South Pacific/Maori actors to play these roles?

2) While it's true that the racial masquerade isn't just inclined towards yellowface--that there are Asian and black actors who are in whiteface--Halle Berry plays a German Jewish woman, Bae Doona plays a 19th C. lawyer's wife in SF and she plays a Latina sweatshop worker in 1970s SF--no one in the film is in blackface (which I am glad about).  My point is this: while it's understandable according to the logic of the film to put both black and white actors in yellowface for the scenes taking place in Neo Seoul, why wasn't that same logic applied for the scenes depicting Polynesian slaves--that not one white actor or Asian actor was put into blackface I think is a recognition on the filmmakers parts that to do so would have been to have ignited a (pardon my language) shitstorm.  But yellowface they figured they could get away with.

3) Did they have to do this racial masquerade at all?  I understand that they wanted to have the theme of eternal recurrence, but since they made such a big deal about the characters in all 6 vignettes having the same comet birthmark, it seems like they could have emphasized THAT feature in all of the characters that are said to "recur" in the 6 different segments.  And/or isn't it possible that Neo Seoul is a cosmopolitan place where there are white and mixed race people?  They didn't change David Keith's skin color when he played a Korean resistance fighter--they just taped back his eyes and put him in white robes.  Seems like they could have simply had him be a black man in Neo Seoul and/or they could have also just kept Bae Doona as the 19th C. wife in SF with Hugo Weaving as her father.  They do this in theater all the time--you just suspend belief because you know this is artificial so why strain things to make a character "look" like the appropriate "race" according to the narrative when s/he can just play that character?  I know, film is different than theater, but Louis CK has had different women playing his ex-wife, including an African American actress.  Seems like they could have been more imaginative in this department.

4) This last issue isn't a yellowface issue, it's an Asian vs. Asian American issue.  Since the characters in the Neo Seoul segment are all speaking in English (many with a British accent, for some reason), why did the filmmakers cast a Chinese and a Korean actress in roles that they could have cast Asian American actresses in?  I have nothing against either Xun Zhou or Bae Doona, but verisimilitude doesn't seem to be top on the Wachowski's agenda (see my above point about using African American actors to portray Polynesians) and if it was for the Neo Seoul segment, why cast a Chinese actress--why not find two Korean actresses?  There doesn't seem to be a clear logic in the casting decisions of which actors are playing which characters.

So leaving aside the problem of yellowface (and I do think it's a problem--as Anthony Lane says in his New Yorker movie review, the use of yellowface "sure as hell doesn't work here, inching beyond embarassment into insult" and others are also protesting the yellowface as well), the other issue I found disturbing in Cloud Atlas was its depiction of Asian women.  In the novel, female fabricants come in various "models"--there's a Sonmi model and a Yoona model.  They have the same face/body but are designated with different numbers: Sonmi-451 and Yoona 939.  I believe in the novel there are 3 different models who are servers at a restaurant.  But in the film, the actresses are actually played by different women who are made to look like they are cloned.  In other words, rather than using CGI to depict the women in the restaurant looking the same, the film used various Asian female extras, gave them the same haircut, put them in the same skimpy outfits, and then said that they were all the same.

In other words, the film seems to be counting on audiences not recognizing Asian female distinction and difference--they are expecting audiences to just believe that different Asian female extras actually all "look" the same--look like one another.  And apparently websites describing the film are also confused about the distinctiveness and individuality of various Asian women since they have confused the film's two Asian female actresses with random Asian extras from the film.  For example: This is the Chinese actress Xun Zhou who plays Yoona-939 (couldn't find a still from the film, but this is taken from the movie's premiere)

IMDB claims that this woman is the actress above, Xun Zhou, but it doesn't look like her. 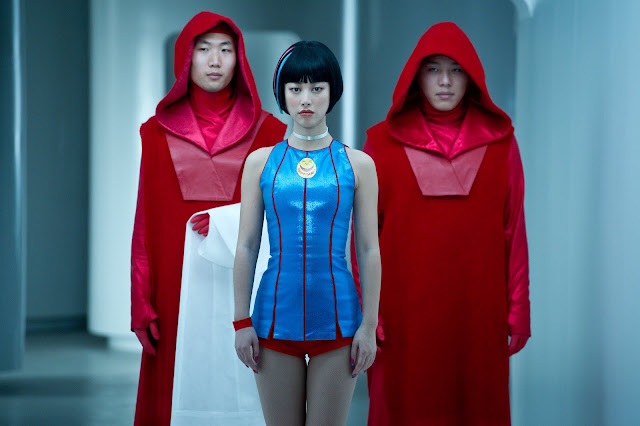 Another website claims that this is the Korean actress Bae Doona...but as you can see below

...these women don't look alike (this is Bae Doona playing Sonmi-451 in the film)

Asian women do not need to be distinguishable from one another, either in the film or outside the film when talking about the actresses portraying cloned Asian women.  Also, while Halle Berry does have a love scene where you see her naked back in one of the vignettes (the one where she is in whiteface), the Neo Seoul segments show the female fabricants either naked or in very skimpy clothing meant to sexualize them.  This is a HUGE problem in terms of the Orientalization going on in this film because there is a LONG history of Asian women depicted as sexually available and sexually evocative in Hollywood cinema.  And I didn't really see the point of depicting the women naked--perhaps the scantily clad part I get, but the film only seemed to reinforce all of the pre-existing stereotypes that we have about Asian women, especially as they've been rendered in celluloid.

But don't take my word for it, see Elaine Kim's documentary, Slaying the Dragon: Reloaded for a history of the sexualization of Asian women that has taken place in the past and still takes place in the present, with Cloud Atlas as the latest entry in the Orientalizing of Asian women.

These actors were playing NEO-Koreans, a racial mix of Korean and white, and whatever else could happen to a race over a 130 year period, they did not recolor the actors skin because they were not going for "yellow face" at all. Just the eyes to suggest that there had been some change in the look of people over a very very large period of time.

MetaCitizen,
Thanks for your comment. I don't know that this is actually the case. I've read CLOUD ATLAS and there isn't a suggestion that the people living in Neo-Seoul are supposed to be a hybrid mixture of Caucasian and Korean ethnicities--quite the contrary, I'd say that the idea in the novel, at least, is that the rest of the world has imploded/exploded due to environmental degredations and that Korea (and hence Koreans) are one of the few stable nation-states left around in the dystopian future.

Certainly in the film I don't think there's a sense of hybridity (beyond the fabricant sort of course).

As for recoloring the actor's skin--the concept of "yellowface" isn't that you are actually changing the skin tone of white actors to look yellow (after all, I've never seen a "yellow" Asian person before). Rather, it's the idea that you can change the race of a person using prosthetics and makeup--like eyes.

At any rate, I think we have a very different view of how race was handled in this film. As for what the directors and producers were going for--I think anytime you are consciously changing the race of one actor to portray the race of another--when you are engaging in racial masquerade--you have to be aware that there's a whole history of doing this--and in the case of white actors portraying Asian people, it's called "yellowface."