I have a certain fondness for films with teachers. You know the kind--the ones where the teacher is truly inspirational and reaches out and makes a difference. I'm thinking of films like Stand and Deliver or Lean On Me. Maybe it's because I'm a teacher myself, and I secretly harbor a wish to make that kind of impact on my students (but truly--can I make that much of an impact teaching at a research university? Then again, we shouldn't belittle any kind of teaching--and the problem with Hollywood is that they overly romanticize the teacher (oftentimes white and middle-class/privileged) who comes into a poor public school and transforms the unruly and poverty stricken children into model citizens and straight "A" students).

Anyway, in the last two weeks I happened to catch 3 different films about teachers on Cable TV (two were shown on the Ted Turner's TCM station). 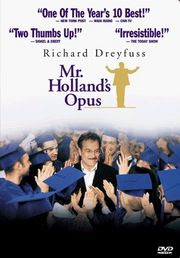 Mr. Holland's Opus, the first of the trio, features a beleaguered public school music teacher (who really wanted to be a great American musician/composer and only took to teaching as a way to pay the bills but of course discovers that he loves doing it and his students love him) over the course of his career, which starts in the early 60s and moves us into the mid-90s. 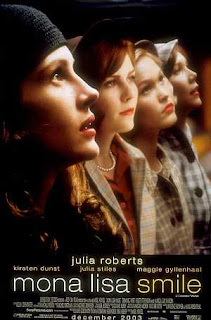 Then there was Mona Lisa Smile, set in Wellesley College (an all women's college--and still around to this day--and it's Hilary Rodham Clinton's alma mater) of the mid-1950s and starring Julia Roberts as a California transplanted Art History professor trying to get her students not to accept the limitations of their gender. She is revered and reviled by both teachers and students because she pushes at boundaries and won't accept the limitations placed on her or her teaching. 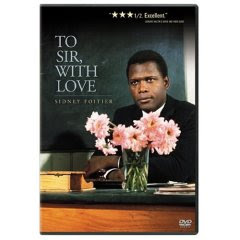 But perhaps the greatest of all the films that I saw recently was To Sir With Love, starring the magnificent Sidney Poitier. I cry every time the end comes--seeing Poitier react to his students' kindness (I don't want to give away the end in case anyone hasn't seen this fantastic film).

To Sir With Love is set in a working-class West End London neighborhood of the mid-1960s. Poitier is a West Indian transplant teaching at this school because racism prevents him from the engineering job that should rightfully be his--and he's just biding time until he can get a "real" job. You can guess what happens in the meantime.

Although I feel sheepish putting To Sir With Love in the same category as the other two films I mentioned above (because the other two films are problematic in certain ways--but what can you expect from mainstream Hollywood media?), all three, besides fitting into the whole "inspiring teacher" genre, are also films with the message of teaching tolerance. In Mr. Holland's Opus, it is the title character who has to learn to adapt and accept his deaf son, as well as the intolerant administration who must learn to adapt to and accept more contemporary forms of music (like jazz and rock and roll) as part of a music curriculum. In Mona Lisa Smile, there is a small sub-plot about a lesbian nurse who is ousted by the administration, not for being lesbian (although it's clear that being queer didn't help her to stay) but for distributing birth control to undergraduates (in violation of MA law of the 1950s), and of course there are the various plots featuring Wellesley women and their quest to find their own identity--whether it is within or without the bonds of marriage.

But of course the film that really teaches tolerance is To Sir With Love. It's overly idealistic, it defuses racial issues in the 1960s by putting Poitier in London, and the racism is really on the mild side, so it's not perfect. But it is so well done--and it feels real--or maybe it's just that Poitier's acting is really so marvelous. Anyway, it strikes me that this film really holds up well--which is sad, of course, because it means that there is still a fair amount of racism and intolerance of difference--and fear about racial others and mixed-race people (again, I don't want to spoil the film by saying too much, but Sidney Poitier's class is not monoracial; there is a mixed-race white-black character and an Asian girl in the class). But it's also so great to see a film in which a teacher, who is a person of color, is teaching tolerance and really changing his students' attitudes--and they are largely all white.

What I wish is that we had a film featuring an African American teaching at an elite boarding school to a largely white, privileged class. What would tolerance look like then? How much difference could a teacher of color--someone with a real social justice bent, make to a group of really privileged students? I wonder when Hollywood will make that film.
Posted by Jennifer at 6:50 PM